Busisiwe Mkhwebane had the "final say" on her office's reports|Tebele. 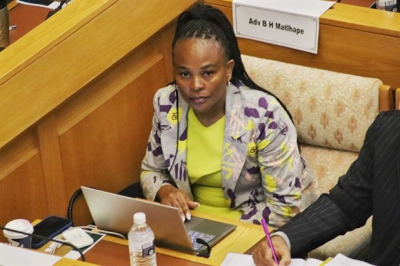 Mahlangu testified at the parliamentary inquiry into Mkhwebane's fitness for office that she wasn't involved in disciplinary proceedings against staff.

He also denied that staff were being purged.

Hearings resumed with another senior manager from the Public Protector's Office, Futana Tebele, as witness.

During his testimony before the Section 194 Committee that is inquiring into Mkhwebane's fitness for office, Tebele continually referred to Mkhwebane as the "executive authority".

Responding to a question from evidence leader advocate Ncumisa Mayosi, Tebele said Mkhwebane reads all the reports issued by her office and sends them back if she is not happy with them.

After prompting from Mayosi, he said Mkhwebane has the "final say" on all reports.

The crux of the charges before the committee – that Mkhwebane had behaved improperly and is incompetent – stem from scathing court rulings against her in relation to the Vrede dairy farm report, the CIEX/Reserve Bank report, the CR17 matter and the so-called "rogue unit" investigation.

Mayosi asked Tebele if he was involved in the Vrede investigation.

He said he wasn't really part of the investigation. He said there was "an opinion" that they needed to check whether there was a public-private partnership, which he was involved in due to his experience in that field.

Mayosi asked if he recalled being involved in discussions about the GuptaLeaks and the Vrede project and whether he asked Reginald Ndou, the executive manager for the provincial investigations and integration unit, not to use the GuptaLeaks.

Tebele said he didn't recall such discussions and couldn't remember telling Ndou not to use the GuptaLeaks.

Tebele said there was tension in the quality assurance unit because the lawyers had to report to Mkhwebane's chief of staff, who wasn't a lawyer.

Adding to the tension was Mkhwebane insisting that investigators determine deadlines.

Tebele testified that Mkhwebane's backlog-clearing initiative "created a lot of pressure on people within the office of the Public Protector to work".

More in this category: « South Africa aims to eliminate Malaria by 2025 |Phaahla. Eskom to implement Stage 2 load shedding from 16:00. »
back to top