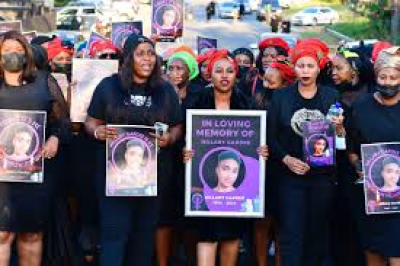 The Nelspruit Magistrate's court in Mpumalanga has denied bail to one of the three men accused of killing, Hillary Gardee.

Sipho Mkhatshwa appeared before the Nelspruit Magistrates' Court on Wednesday.

Mkhatshwa, together with Philemon Lukhele, and Mduduzi Nkala face charges of murder, conspiracy to murder, kidnapping, rape, possession of firearms, and defeating the ends of justice.

Delivering the judgment in a packed courtroom, Magistrate Eddie Hall said the accused did not cite independent evidence.

"He failed to show that there are factors that in the interest of justice permit his release on bail or that there are exceptional circumstances. He failed to adduce independent evidence of innocence therefore the bail is not granted and bail is refused."

The 28-year-old, who went missing in April, was the daughter of former EFF secretary-general turned attorney Godrich Gardee murder.

Her body was found dumped in the bushes outside Mbombela in Mpumalanga in May.

The case has been postponed to 22 August for indictment.

Meanwhile the Eswatini government has slammed allegations by Godrich Gardee that King Mswati III is responsible for the death of his daughter, Hillary.

On Monday, Gardee, an attorney, alleged on Twitter that Mswati was involved in the murder in retaliation for the EFF's blockade at border posts on 12 April.

The blockade at the Ngwenya and Golela border posts, which lasted six hours, was held in solidarity with the Eswatini wing of the EFF as part of the party's call for democracy and human rights in the country.

He said it was no coincidence that Hillary was kidnapped 17 days after the protest and that a member of the People's United Democratic Movement was arrested and linked to the murder.

Eswatini government spokesperson Alpheous Nxumalo described Gardee's tweets as "wild and empty allegations", adding that the government would not be drawn into the "mess" that had happened.

Nxumalo said the EFF's blockade had not been the first time that Eswatini's border posts were closed by a political party, adding that a small demonstration at the border by the EFF did not warrant a government response.

I don't know how he can stoop so low as to use such a tragic situation of the demise of his daughter, and make empty political claims (sic)," Nxumalo added.

"As the government of the kingdom, our position is that Gardee must allow the justice system of his own country to take place.

"The kingdom of Eswatini has absolutely no history of assassinating people for toyi-toying at the border, let alone for their political reasons."

More in this category: « Cogta MEC Lebogang Maile commits to address concerns of Tembisa residents. Patel announcement flies against the spirit of Poultry Sector Masterplan|SAPA. »
back to top