ANC reaffirms it's commitment to establish a new state bank. 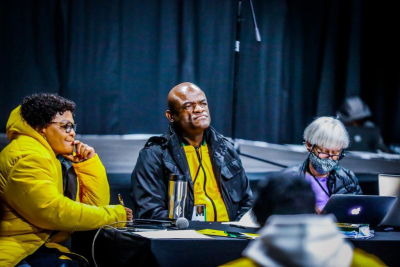 The African National Congress (ANC) has reaffirmed its position to create a state bank in South Africa.

Speaking at the latest ANC national policy conference, party president Cyril Ramaphosa said that delegates agreed to the formation of a state bank and urged that the process to establish it be accelerated.

Ramaphosa reiterated statements made in his 2020 state of the nation address where he said the government was moving forward with the establishment of a state bank as part of its efforts to extend access to financial services to all South Africans.

Communications and Digital Technologies minister Khumbudzo Ntshavheni, speaking as a party spokesperson at a recent media briefing, said that a state bank would enable the government to rely on interest earned from customers’ deposits to fund transformation interventions in the country.

Access to capital and access to funding is critical to the diversification of the economy," said Ntshavheni. "We can not be apologising in terms of the interventions we need to do to transform the sector and raise money for the government."

She said the ANC proposes for government employees to be paid from the state bank.

The government will not turn either the African Bank or the state-owned Postbank into the country’s state bank, said Ntshavheni.

The minister said that African Bank should remain supported as a commercial bank that can compete freely in the banking sector. She added that it being black-owned makes it unnecessary for the government to turn it into a state bank.

Ntshavheni said that the ANC support for African Bank must make sure it remains commercially viable with the interventions to save the bank, ensuring that there is diversity in the financial sector.

In terms of Postbank, she said that the entity must make its own arrangements in terms of whether it is sustainable and how it distributes social grants, adding that she does not understand why the government should take out its own money to assist it.

More in this category: « Load shedding pushed to Stage 4 on Thursday from 16:00. Call for government to intervene on China ban of SA wool. »
back to top