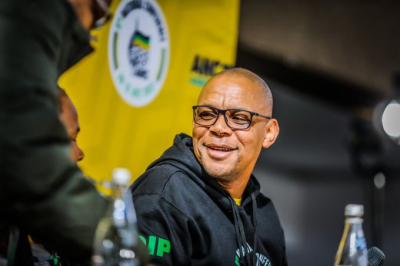 The protesters from different political parties gathered outside the Krugersdorp Magistrate's Court in Gauteng on Wednesday, following court appearance of 80 people who were arrested for various offences.

The police operation followed after the rape of eight women on a mine dump. To date, no one among the arrested suspects has been directly linked to the incident.

The women were raped last week while filming a music video on the mine dump.

Some of the men have been charged with being in the country illegally. DNA samples have been taken to determine if they were linked to the rapes.

The ANC protesters were joined by those from the Democratic Alliance (DA), including other parties.

"We are calling on the police minister to step up law enforcement because we are setting a precedent that anyone can get away with anything."

The ANC has vowed to highlight and address challenges posed by illegal miners or zama zamas.

"We need government to work with speed to deal with these issues of zama zamas, illegal immigrants and mining. And also impose on illegal companies, never to leave mining dumps unrehabilitated."

The cases of illegal mining and contraventions of the immigration laws were postponed to next week Wednesday.

Most of the accused were from Lesotho, Mozambique and Zimbabwe. It was understood 69 individuals were undocumented.

The men, who were represented by Legal Aid, faced charges which included illegal mining, contravention of section 49 of the Immigration Act, unlawful use of explosives and firearms and possible attempted murder.

More in this category: « Creecy emphasises the importance of supporting youths with business ventures. Makashule Gana quits the Democratic Alliance but not politics. »
back to top