Makashule Gana quits the Democratic Alliance but not politics. 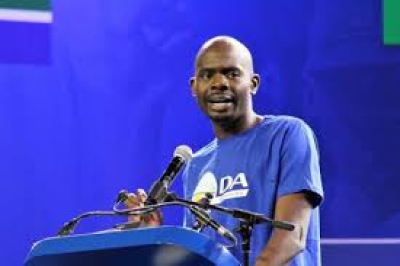 The Democratic Alliance (DA) member Makashule Gana has resigned from the party — citing a widening trust deficit between citizens and political parties.

In a statement this morning, Makashule said he was leaving the party, but not politics:

The 39-year-old did not immediately announce whether or not he was joining another party, but made it clear that he was staying in politics.

"I leave the DA with a clear conscience, no regrets, and a cemented sense of purpose and calling to serve the country. I am grateful to my colleagues – activists, members, staff and public representatives – with whom I have shared two decades of hard, yet fulfilling work. I wish them well in the future.

"There is a widening trust deficit between citizens and political parties that has resulted in many eligible voters turning down the opportunity to vote out of despair and disappointment. I do not believe that any of the existing political parties can re-orientate their politics and internal culture to regain public trust on a massive scale," he said.

Gana, however, hailed the efforts of communication specialist and former journalist Songezo Zibi who has been mobilising South Africans to work towards an alternative future outside of the ANC. Zibi has authored a new book called Manifesto: A new vision for South Africa and is working with civil society in articulating what needs to happen for South Africa to realise good governance and the values enshrined in the Constitution.

Gana, an avid marathon runner, joined the DA as a 19-year-old student from the University of Limpopo in 2002.

DA in a short statement, noted the resignation and thanked Gana for his immense contribution to the party for the past twenty years.

More in this category: « Political parties show solidarity to demand safety for women after gang rape saga. Arthur Fraser told me to "pull up socks" in supporting Mkhwebane| Neshunzi. »
back to top