Arthur Fraser told me to "pull up socks" in supporting Mkhwebane| Neshunzi. 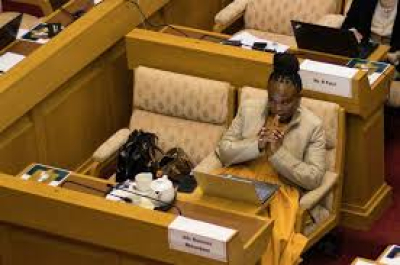 Neshunzi testified before the committee, lifted the veil on the SSA's influence at the office.

Advocate Dali Mpofu SC said the Public Protector's legal team wanted to register an objection to the relevance of Neshunzi's evidence. He described Neshunzi as a "disgruntled employee".

He added that it remains the view of the Public Protector's legal team that the evidence led at the committee should focus on the charges identified by the independent panel.

Neshunzhi said he was given a sealed letter to take to Fraser. He was then told he had failed to investigate an alleged IT security breach properly.

Mkhwebane then instructed him to leave the office, and he had to hand in his laptop and office keys. Neshunzhi considered it a suspension. He asked whether he was suspended but did not receive an answer.

The letter to Fraser asked that the SSA "recall" Neshunzi for training.

Neshunzi was later asked to do another investigation. This time, he had to determine whether documents President Cyril Ramaphosa lodged with the office were leaked. He found there was no leak, as the Presidency issued a statement on the documents.

He said his relationship with Mkhwebane subsequently deteriorated.

"There was an expectation that I would be her ears and eyes in the office, and I was letting her down," read Neshunzhi's affidavit.

Neshunzhi said Fraser told him to "pull up your socks" and go beyond the call of duty to demonstrate his support for Mkhwebane.

At the time, he added, he did not know how he failed in his job as Mkhwebane did not directly relay it to him.

Later, Neshunzhi sought the SSA's assistance in developing a proper case management system for the office.

He said he thought it had the required expertise as it was the "custodians of information in the state".

"One of the persons from the SSA involved was Mahendra Moodley at the SSA offices, I understood him to be an expert in IT, and in fact, some whiz kid in that field."

Moodley is the SSA operative who allegedly gave Mkhwebane the wording of her controversial recommendation in the CIEX report that Parliament should amend the Constitution on the SA Reserve Bank's mandate.

During his cross-examination of former Public Protector investigator Tebogo Kekana, Mpofu suggested Moodley was an expert on economics.

More in this category: « Makashule Gana quits the Democratic Alliance but not politics. Opposition parties unites to demand Ramaphosa answers over farm robbery. »
back to top