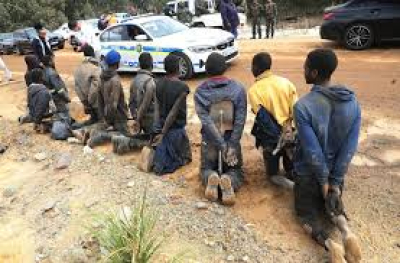 The community of Kagiso in Krugersdorp have taken to the streets over illegal mining in the area.

The corner of Randfontein Road and Geba Street has become a battle ground between police who fired rubber bullets at residents throwing rocks at them.

There has been a sharp focus on illegal mining on the West Rand after the rape of eight women at West Village in Krugersdorp last week.

At least 30 undocumented persons have been arrested in Krugersdorp during an operation led by Gauteng Police Commissioner, Lieutenant General Elias Mawela.

According to Gauteng Police spokesperson, Brigadier Brenda Muridili, the arrests brings the number of total suspects nabbed to over 130 since the start of the province's high level operations last Friday.

"The thirty undocumented persons will be processed by the established West Rand Processing Centre before appearing in the Krugersdorp Magistrates' Court within 48 hours. They are facing charges related to the contravention of the Immigration Act," Muridili said.

"The operations will be conducted continuously to ensure that the areas where illegal mining activities are prevalent are stabilised.

"[On Wednesday], the team went back to operate at the mining dump near the R28 road in Krugersdorp. They managed to remove plastic structures used by the illegal miners. Another group of members then followed up on information received from the community members as well as Crime Intelligence and raided houses where alleged illegal miners were hiding," she said.

Air support for the ground forces was rendered by the SAPS, Fidelity and Tracker helicopters and drones.

She added that members of the community are encouraged to assist police in the arrests of criminals where they live.

"Members of the public are encouraged to report any knowledge of criminal activities in their communities by calling the SAPS Crime Stop toll free number 08600 10111 or to send tip-offs via MySAPS Application which can be downloaded on any smartphone. Information received will be treated with confidentiality and callers may remain anonymous," Muridili said.

More in this category: « Opposition parties unites to demand Ramaphosa answers over farm robbery. SARS boss Kieswetter sends out strong message against defrauding the entity. »
back to top