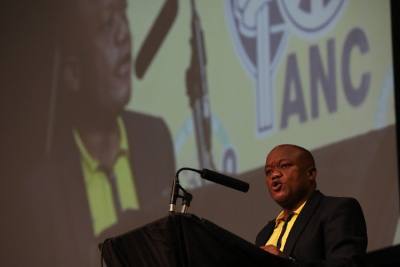 The ANC in Kwazulu-Natal (KZN) has confirmed that provincial premier Sihle Zikalala has requested to step down from his position as Premier of the province.

It has emerged that following an inaugural meeting of the new ANC Provincial Executive Committee, Zikalala offered to tender his resignation this weekend.

The Provincial Executive Committee (PEC) of the party met on Thursday for the first time since the provincial elective conference.

Through a statement, the ANC said "Cde Zikalala offered the Provincial Executive Committee (PEC) his resignation yesterday, which was accepted" and the PEC has since communicated with the ANC National Officials and were instructed to make recommendations of three names who will undergo an interview process.

The names of the three candidates have since been submitted and they according to the ANC in KZN will undergo interview process on Saturday.

The party said it was with great pain that it accepted Zikalala's resignation "as he was still doing a great job in the province since he took over".

"We are grateful to the job he has done for the people of this province and we appreciate that he made a conscious decision not to leave office hastily. Cde Zikalala's tenure has come with a lot of good in the province, including a number of provincial government departments receiving unqualified audit outcomes for the first time," read the statement.

While a number of names have been touted as possible interim Premier, including MEC for Transport, Community Safety and Liaison Peggy Nkonyeni and MEC for Finance Nomusa Dube-Ncube, it appears that Health MEC Nomagugu Simelane is the frontrunner.

This would then pave the way for provincial treasurer Dr Ntuthuko Mahlaba to become Health MEC. Both Nkonyeni and Dube-Ncube are expected to retain provincial cabinet positions.

Newly elected chairperson Siboniso Duma is being touted to head up the Economic Development, Tourism and Environmental Affairs (Edtea) portfolio or the Department of Transport.

It has been suggested that Edtea MEC Ravi Pillay would then head up the Department of Sport and Recreation.

Zikalala failed to make it into the PEC elected at the ANC provincial conference last month.

He accepted nomination as an additional member of the structure on Sunday after losing the chair position to Sboniso Duma by more than 200 votes.

Zikalala will address the media on Friday at 3pm.

More in this category: « 'I don't think your client understands legal principle' | Pillay to Mpofu. Government to hold imbizo in Kagiso over illegal mining |Ramaphosa. »
back to top