Teffo in a bitter fight to stop Legal Practice Council from having him disbarred. 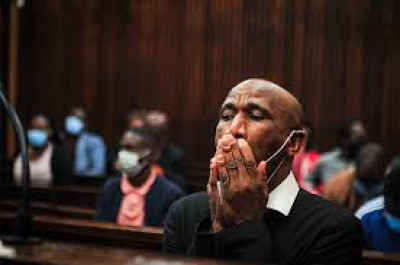 Advocate Malesela Teffo, who the Legal Practice Council (LPC) applied to have him disbarred, spent most of his time in court on Friday arguing for a postponement to no avail instead of focusing on the damning allegations against him.

The Gauteng High Court in Pretoria heard an application by the LPC on Thursday to have Teffo either suspended or struck from the roll of advocates.

The LPC detailed almost two dozen allegations against him, including disrespectful and contemptuous behaviour in court, misleading the court, assault, and the misappropriation of monies from clients.

The case was rolled over to Friday for Teffo to make his submissions as to why he should not be struck from the roll and presumably to present evidence to that effect.

However, instead of focusing on each and every allegation, he spent much of his time claiming his constitutional rights had been violated and he should be afforded time to respond to the allegation.

"I'm not going to deal with the utterances by the so-called applicant," Teffo said. He submitted a similar argument on Thursday which was dismissed.

Teffo spent the first part of his argument referring to the Constitution, saying his rights had been violated by the LPC and the court hearing the case. He specifically honed in on Section 35 of the Constitution which focuses on the rights of an arrested, detained or accused person.

He read out Section 35(3) which states every accused person had the right to a fair trial, which includes the right to be informed of the charge with sufficient detail to answer it and to have adequate time and facilities to prepare a defence.

Halting his line of argument, Teffo then told the court most of the complaints before him have been ventilated in other forums.

However, he did not provide any information or evidence to this effect. Before Teffo could return to the constitutional arguments, advocate Mfesane Ka-Siboto, for the LPC, objected to Teffo basing his arguments on Section 35.

Ka-Siboto argued these were civil proceedings and Section 35 specifically referred to an accused person. The court ruled Teffo could continue with his arguments but also related he was not an accused person, but a respondent.

Teffo then came to crux of his argument that he was allegedly not given an opportunity to respond to the complaints against and he was not given any of the court papers.

However, Acting Judge Thembi Bokako stopped Teffo in his tracks, informing him the court was in possession of the documents which included correspondence the LPC had sent the bundle of documents to him. The court on Thursday had also found Teffo was supplied with the documents despite his denial.

"I vehemently deny that," Teffo responded, maintaining he had not received any of the documents and therefore needed a postponement and an order that he be given the documents and be allowed to prepare his defence.

"I'll request the applicant to provide me with that bundle that he was reading from so that I can go and prepare myself."

Despite Teffo's assertion, the court had also previously heard he had submitted an answering affidavit after receiving the notice of motion and founding papers more than a year ago.

Teffo again submitted he should be given the court papers and be allowed to prepare before returning to court to make arguments. He then briefly touched on one or two of the complaints, and spoke about racism within the police that seemingly had no bearing on the case before the court.

Before concluding, Teffo claimed the application was orchestrated by the police, National Prosecuting Authority and courts.

He, however, offered no evidence to this effect.

Judge Justice Nyathi then reserved judgment, saying the case would be dealt with expeditiously.

Teffo interrupted the court, asking his request for the documentation and postponement was denied. Bokako, however, told Teffo the information was provided to him and he knew that for fact.

She added Teffo had ample time to prepare for the application as the motion of notice had been filed more than a year ago and this issues canvassed go as far back as 2019.

As Teffo attempted to respond, Nyathi adjourned the case.

More in this category: « Tembisa returns to normal after Campbell promises to attend to grievances. No evidence found of sexual harassment during EFF's removal from parliament. »
back to top