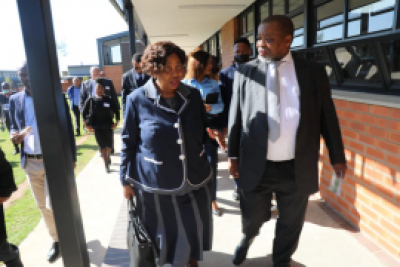 The Ministers of Basic Education and Minerals and Energy have officially unveiled a newly built world-class Waterkloof Hills Combined School in the mining community of Rustenburg, North West.

This comes after Royal Bafokeng Platinum (RBPlat) and the North West Department of Education (NWDoE) entered into an agreement in 2019, on an equal financial contribution basis, to construct a much-needed primary and secondary school to the tune of R140 million.

According to the departments, R58 million went to local sub-contractors, while R7.3 million was spent on local suppliers.

Minerals and Energy Minister, Gwede Mantashe, has described the school that prides itself on 32 smart classrooms, a multi-function room and science laboratories, as a state-of-the-art project.

"The infrastructure helps develop children and transform the future of our country," he said on Friday.

"in the mining industry, we have something called a Social and Labour Plan, a concept of mining companies investing where mining companies operate. It’s a fee they pay for their survival and protection, and not a favour,"he explained.

Mantashe encouraged other mining companies to follow RBPlat's example, invest in meaningful projects and pay for their "social licence" to communities where they extract minerals.

"We must change the view that all mining companies do is leave big holes in the ground and disappear. What we are dealing with in Krugersdorp is the legacy of mining, where mines leave holes and now have no owners, and we as the department, must seal those holes."

However, according to Mantashe, it is high time mines do better.

"A project must have an impact on a community. We make that point because we saw a trend where companies were building small community halls and disappear. It doesn’t make an impact,"he stressed.

Meanwhile, the Department of Basic Education said it welcomes the construction of Waterkloof Hills Combined School, as it ensures that the infrastructural improvements are in line with norms and standards.

RBPlat CEO, Steve Phiri, said the schools will not only serve their employees' children but also those who live in the surrounding communities.

"Our purpose has always been to create economic value that can be shared with all our stakeholders and this project offers a legacy of sustainable benefits, through quality education, for the next generation of leaders in our communities," said Phiri.

North West Department of Education MEC, Mmaphefo Matsemela, said she believes that it takes a village to raise a child.

"It means that we cannot succeed alone and without the involvement of all other stakeholders. We are extremely grateful for the RBPlat partnership, which reflects a good example of a successful public-private partnership, which is always encouraged by government," she said.

More in this category: « At least one dead and another critically injured in N3 horror crash. Transnet made progress in improving its financial position |OV Report. »
back to top