Numsa headed for a massive motor-sector strike over higher wages. 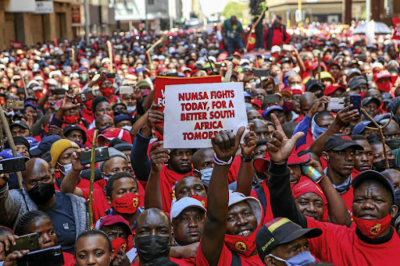 The National Union of Metalworkers of South Africa (Numsa) says it is headed for a strike in the motor sector, which is set to affect 306,000 workers nationally.

Numsa said that it was unable to reach an agreement on a 12% across-the-board wage increase with the Retail Motor Industries (RMI) and the Fuel Retail Association (FRA) after two days of negotiations.

Numsa represents at least 90,000 employees in the sector, including workers at petrol stations, component manufacturing companies, and car dealerships.

The FRA made a three-year agreement offer of 4% across the board for all forecourt attendants alongside 3% for cashiers. Numsa said that it could not accept the offer made. The FRA's offers were made on the ground that Numsa drops all other demands.

°For the overtime rate to be in line with chapter 3 of the Basic Conditions of Employment Act.

°Alignment of the wage negotiations calendar.

°The introduction of a peace clause, enabling workers to raise issues in the workplace that are not covered by the collective agreement.

°Social benefits such as medical aid for garage workers.

°Scrapping the discrimination clauses against Numsa member of the Sick and Accident Fund.

Mark Roberts, a sector coordinator for automotive component manufacturers, said that the real challenge regarding the wage negotiations is that CPI is "just going up and up and up".

"We have to try to fix a realistic point at which to settle. What is fundamental to us, as it is for the other big sectors, is to get a multi-year agreement," he added.

Numsa said it would be organising a council meeting in the coming weeks to mobilise and is awaiting a date from the CCMA to deal with picketing rules.

"We are at the mercy of the CCMA and employer. The ball is in their court; they have the power to stop the looming national strike in the motor sector if they put a meaningful offer on the table," said Numsa.

The FRA's chief executive officer Reggie Sibiya said that it would not comment on the matter as it is being forwarded to the CCMA.

More in this category: « Eskom cable thieves get more than a decade of jail time. Solidarity sends list of 300 power experts to Gordhan, Eskom. »
back to top