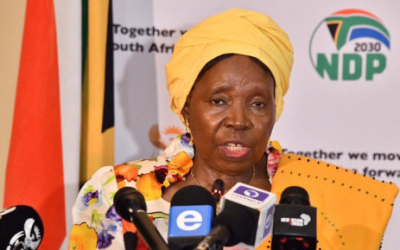 CoGTA Minister Nkosazana Dlamini-Zuma has told the National Coronavirus Command Council (NCCC) that the sale of tobacco and alcohol should continue to be banned until the country reaches Level 1 of the lockdown.

Media24 was reliably told that Dlamini-Zuma told the NCCC this week that she believed it would be too much of a health risk to allow the sale of cigarettes and alcohol on 1 June when the country is expected to go to Level 3 of the nationwide lockdown.

This prompted a debate in the meeting, chaired by President Cyril Ramaphosa, with no resolution on the matter.

A high-ranking insider with knowledge of the meeting said Dlamini-Zuma had come prepared with academic papers that argued against the sale of tobacco and alcohol during the Covid-19 pandemic, citing health risks.

This is despite an agreement that government would lift the restrictions on the sale of tobacco under Level 3.

A reliable insider said that even Health Minister Zweli Mkhize, who initially supported the ban, seemed to have come to terms with the fact that cigarettes and alcohol should be allowed with strict conditions under Level 3.

There was no decision on the matter, the source said.

Meanwhile the Fair Trade Independent Tobacco Association said in a statement on Friday,said “Our understanding is that the issue is now before the National Coronavirus Command Council, where it is being debated.”

The industry body has taken legal action against the government, which has until Tuesday to provide reasons why the ban remains in force, according to a court order.

A ban on alcohol sales is likely to be partially lifted when the country moves to level 3, according to the people, who spoke on condition of anonymity.

British American Tobacco suspended legal action against South Africa’s government earlier this month on the assumption that tobacco sales would be allowed to resume when the rules were next eased.

Research into the relationship between tobacco usage and Covid-19 is inconclusive."The World Health Organization has not released evidence or data on how smoking impacts the virus and has not taken a position on whether countries should ban tobacco sales."

Social Media Reaction on the banning of Alcohol and Cigarette until Level 1.

A rare picture of strict parents who dont want their kids to smoke and drink#dlaminizuma pic.twitter.com/iez92mcoku

At this point it feels like Cyril is the minister and Dr Nkosazana Dlamini-Zuma is the actual president.#dlaminizuma pic.twitter.com/Y8vdvPtHh3

Someone tell #dlaminizuma that we’re sorry that Zuma was removed from the presidency before his turn ends . This is too much we’re Thirsty , actually we are dry ?.#day57oflockdown #sabcnews pic.twitter.com/0yiilnLBvZ