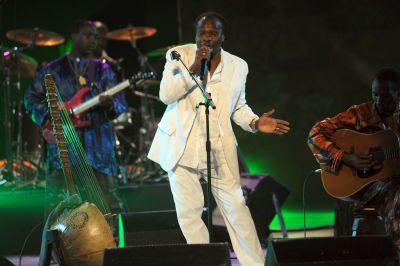 The Yeke Yeke singer who brought West African music to the world in the 1980s has died in his native Guinea.

His son said the coronavirus travel restrictions prevented him from travelling to France for health treatment.

Mory Kanté started music at the age of just seven, when he was sent to Mali to learn to play the kora harp.

In the 1970s, he joined Mali's legendary group the Rail Band of Bamako and performed alongside Salif Keita and became the lead singer after Keita left.

Kante is best known for the dance song Yeke Yeke which was a huge hit across the African continent before becoming a Number 1 in several European countries, including France and Germany, in 1988. It was the first ever African single to sell over one million copies.

"He suffered from chronic illnesses and often traveled to France for treatment, but that was no longer possible with the coronavirus," his son Balla Kante told AFP news agency. Guinea has seen over 3,000 confirmed cases of coronavirus and 18 people have died.

"We saw his condition deteriorate rapidly, but I was still surprised because he's been through much worse times before," he added. There was no suggestion that coronavirus was his direct cause of death.

Kante was nicknamed the "electronic griot." A griot is a name for traditional West African musicians and storytellers.

He will be remembered as a founding member of the "African wave" and inspiring many other African musicians to share their music with an international audience.

Kanté is the latest prominent African musician to pass away, after the recent deaths of Manu Dibango, Tony Allen and Idir.