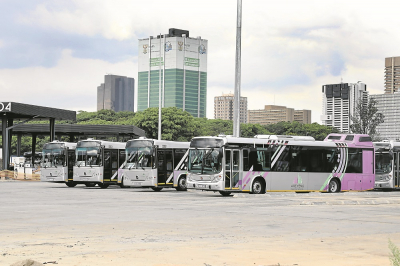 The City of Tshwane’s Roads and Transport Department, together with the Tshwane Rapid Transit (TRT), suspended the A Re Yeng bus service operations in Mamelodi on Tuesday morning.

The suspension comes after protesting members of a local taxi association attempted to hijack two of the city’s buses.

On Monday, the TRT received a tip-off that there was a planned disruption of the A Re Yeng bus operations in Mamelodi on Tuesday.

At around 4am, the area around the BP Garage in Mamelodi East, near Solomon Mahlangu Road, was blockaded with rocks and debris. The area around Tsamaya (Old Putco Depot) was also blocked off.

“A precautionary decision was taken not to send buses to Mahube and Lusaka and rather start operating from Balebogeng. There was a Putco bus blocking the road which seemed to have been hijacked from a driver. Police rescued the bus at around 6.30am around the BP Garage taxi rank,” the City of Tshwane said.

Most of the trips taking place between 4.30am and 6.30am were undisturbed except for the Lusaka and Mahube areas where the buses did not go as a result of the threats.

“At about 6.34am there was an attempt to hijack two of the A Re Yeng buses, but police acted swiftly and diffused the situation. Police then escorted all the buses out of Mamelodi with the passengers on board.

“After this incident a decision was taken to suspend all operations with a view to safeguarding the lives of the commuters, bus drivers as well as protecting the City’s assets and redirected the buses back to the Belle Ombre and Watloo bus depots,” the City said.

Tshwane Head Administrator Mpho Nawa has condemned the incident and commended law enforcement officials for their swift action to foil the attempted hijacking of the buses.

“The right to protest is an inalienable right enjoyed by all South Africans, however, it is unacceptable to attempt to hijack a bus transporting passengers who were en route to work to earn a living for their families,” Nawa said.

TRT CEO Mike Matebane said the incident was unfortunate as his organisation had a great relationship with the passenger community and the taxi industry in Mamelodi.

“Today, TRT found itself in a very difficult situation due to the imminent threat to the passengers, employees and assets as a result of the violent protest in Mamelodi,” Matebane said.

The situation will be monitored during the day to determine whether it would be safe to operate the afternoon and evening shifts.

The commuters will be updated accordingly. The City has apologised to commuters for the inconvenience caused.

Tweet
More in this category: « Cyril Ramaphosa offers his condolences to the families of COVID-19 victims. Police searching for three gunmen after six people were killed in Jabulani Hostel,Soweto. »
back to top