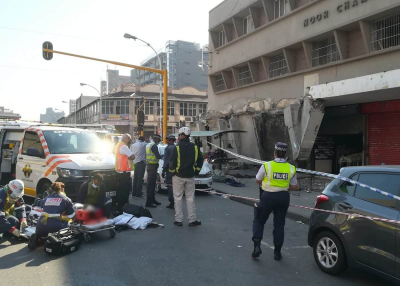 Multiple people have been injured while many are believed to be trapped in a structural collapse in Durban central. Picture: Netcare 911.

One person has been killed in the Durban CBD after a building collapsed on Tuesday morning.

Just after 9:30am, emergency services were called to the scene at the intersection of Yusuf Dadoo and Dr Goonam streets.

Life Response spokesperson, Leon Fourie said they found a number of people trapped in a shop and some had been hurt.

"We found that one person has passed away, and four people were injured in the collapse."

KwaZulu-Natal: One dead multiple injured, many believed to be trapped in structural collapse in Durban central https://t.co/z6SbUI947x#ArriveAlive #StructuralCollapse @Netcare911_sa pic.twitter.com/rGeoVg91Lj

"We managed to gain access by breaching through a wall, and when we got to the other side, we found another six people that had been entrapped in the building,Fourie said."

Part of a balcony collapsed at a building in Grey Street Durban. Reports of one fatality. pic.twitter.com/Oqf0bV8Lp9

The exact number of injured people is still to be confirmed.

Twitter
More in this category: « Coronavirus Live Updates:Tanzania president declares country 'coronavirus-free'. Cele - The lifting of the ban on the sale of alcohol ushered an unwanted surge in reported deaths. »
back to top