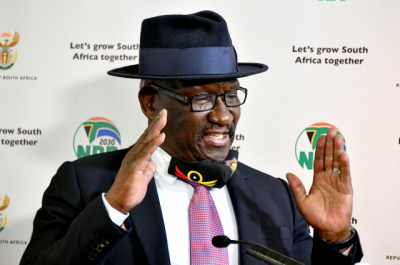 Police Minister Bheki Cele during a press briefing at the Jabulani Hostel in Soweto on Tuesday,said the lifting of the ban on the sale of alcohol since the beginning of lockdown level 3 in June has ushered an unwanted surge in reported deaths after a lull between March and May.

Cele was in the area after six men were shot and killed on Monday evening. Police are now searching for three men believed to be linked to the crime.

During the briefing, Cele spoke about two women who were this week brutally murdered in Cape Town and Johannesburg. Naledi Phangindawo, 25, was allegedly heinously hacked to death by a man close to her. The suspect has since been arrested. In Soweto, Tshegofatso Pule, 28, was on Monday found hanging from a tree in Roodepoort where she went missing on Thursday.

“Nationally we’d sit back and complain about 30 people that have died,” said the Minister.

This was until last Monday, when the ban on alcohol during the lockdown was lifted.

“Until Monday - the 1st of June - which is not an entirely dangerous day, for the first time since the lockdown, we got reports of 40 people killed. The next day there were 51 [murders] and there were 69 this past Sunday,” he said.

During this period police were averaging between 20 and 30 murder cases a day.

“That has now just gone up, including attempting murder, including the abuse of women and violence against women,” he said.

The Minister described the murder of the two women as brutal.

“It’s an issue that we raise as police and law enforce that [perpetrators] of crime are well known to the victims. By the look of things, both these ladies were killed by people known to them. I’m not confirming that, the investigations are ongoing,” he said.

He emphasised that it was difficult for law enforcement to curb domestic violence.

This, he said, was because police could not monitor people’s behavior in their homes.

“Unfortunately, in those situations, we react. But it’s a question, we agree, we need to take up. We [need] to work very closely with all other structures and monitor closely gender-based violence, as [cases] can be brutal as we have seen with the two ladies,” Cele said.

He pleaded with men, communities and families to report suspiciously abusive relationships. He said this would ensure the police were proactive in responding in their action.

Tweet
More in this category: « One dead, several injured after building collapse in the Durban CBD. Burundi President Pierre Nkurunziza dies of cardiac arrest at 55. »
back to top