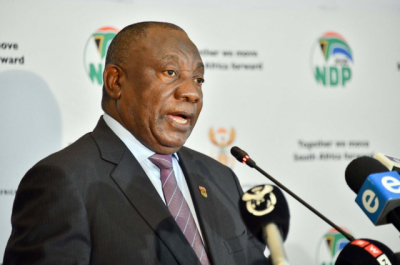 President Cyril Ramaphosa received a courtesy call from the Prime Minister of the Kingdom of Lesotho, Dr Moeketsi Majoro, at his official residence in Mahlamba Ndlopfu, Tshwane.

This will be the first courtesy call by Dr Majoro on President Ramaphosa since his swearing in as the Prime Minister of the Kingdom of Lesotho on 20 May 2020.

Prime Minister Majoro was appointed the leader of the kingdom’s government, following the resignation of his predecessor, Dr Thomas Thabane.

Ramaphosa has congratulated Majoro on his appointment as the new Prime Minister of Lesotho, and wished him well during his tenure.

The Presidency said the courtesy call will enable the two leaders to discuss bilateral cooperation, regional and continental issues of mutual interest, amidst the fight against the Coronavirus global pandemic, among others.

“It is an opportunity to further nurture the existing strong bond of friendship between the people of the two countries. Furthermore, President Ramaphosa, in his capacity as the Southern African Development Community (SADC) Facilitator to the Kingdom of Lesotho, will exchange views with Prime Minister Majoro on the continued implementation of agreed constitutional and security sector reforms in Lesotho, among others,” the Presidency said.

Ramaphosa has called for a shared vision and strategy between South Africa and Lesotho to revive the economy in the aftermath of COVID-19.

“Clearly, COVID-19 is having quite a negative impact on many economies around the world and we are also going to be adversely affected, both Lesotho and South Africa.”

He said international financial institutions like the World Bank are predicting that both Lesotho and SA’s economies are going to shrink significantly.

“Therefore, it calls on us to come up with a clear vision, clear strategies of how we’re going to address our badly affected economy, in our case, which we share with Lesotho.”

Ramaphosa and Lesotho’s Prime Minister Moeketsi Majoro were addressing the media at Mahlamba Ndlopfu Presidential Guesthouse in Tshwane on Friday.

The two leaders discussed, among others, bilateral cooperation, and regional and continental issues of mutual interest amidst the fight against the Coronavirus global pandemic.

Twitter
More in this category: « Estate Agency Affairs Board to re-open its offices following their closure due to COVID-19 lockdown. NGO's urged to report all cases of child abuse. »
back to top