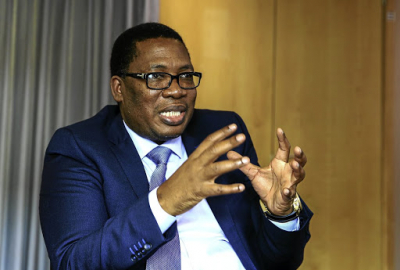 Gauteng MEC for Education Panyaza Lesufi is self-isolating and awaiting his Covid-19 test results, after he was exposed to individuals who had tested positive for the disease.

This was revealed on Friday during an update by the Gauteng coronavirus command council, or PCCC, the province’s response to the Covid-19 pandemic.

The Health MEC also said officials at the Gauteng disaster command centre who tested positive for Covid-19, including some of his own staff members, are in self-isolation and are receiving medical attention.

Meanwhile the Gauteng provincial government said they had to close 56 schools in the province after several people tested positive for COVID-19.

This includes an undisclosed number of teachers, pupils and supporting staff.

Premier David Makhura said the affected schools were now being disinfected and cleaned to get rid of all traces of the virus.

The premier said he didn't want them closed for too long.

Makhura said he and his team were formulating a plan on how to minimise infections at schools before all pupils were allowed back.

In a separate incident,A 12-year-old boy has died after falling ill at the Kokosi Primary School in Fochville on Thursday.

According to a statement issued by the Gauteng Department of Education, the boy was not feeling well when he arrived at school and was taken to an isolation room.

"The safety committee realised that his condition was not improving, they called parents and rushed him to a local clinic; sadly, he was certified dead on arrival, in the presence of his parents," said spokesperson Steve Mabona.

He said the department would conduct a forensic investigation into the circumstances surrounding the boy's death with the Department of Health.

The department's psycho-social team would visit the school to provide the necessary support, Mabona said.

Tweet
More in this category: « Sports bodies have until 26 June 2020 to make submissions. COVID-19 Update:The cumulative number of confirmed COVID-19 cases is 61 927. »
back to top