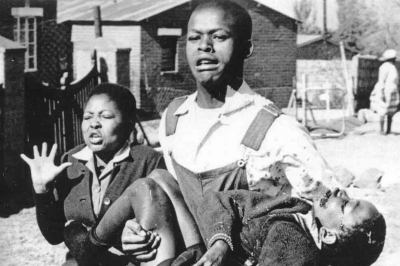 The prolific image taken by Sam Nzima of Hector Pieterson being carried by Mbuyisa Makhubo after being shot on June 16, 1976 while Pieterson's older sister, Antoinette Sithole, runs beside them. This image has become the iconic representation of the 1976 student uprisings.

Mama Sophie Tema was born in Sophiatown on 17 Feb 1937.Her infantile nursery schooling was obtained from Anglican centres later she passed into the 0rlando East St Marys Primary School.Her parents later sent her to Stofbuerg Gedenskool Boarding School in the Free State to complete her educational hunger was quenched by studying privately with the Union Colleg(in Johannesburg)for Matric.

Unaware that she had a talent of writing she ventured into the male dominated media department,luckly she was fully endowed with well-dog-tenacity of hard work,the spirit of no-turning back plus deep seated love for success hence her forte for writing deepen her into almost all the newspaper houses on the Reef(Johannesburg).Firstly "ThevEyethu"0rgan.

The following years she had a stint with "The World" the daily township organ.During this period uTatu Percy Qoboza was an editor World had traditionally been edited by a white "editorial director"and a nominal black editor.Educationalist MT Moerane had been editor before Qoboza editorial decisions were taken by Derrick Gill later Charles Still both hard-nosed journalists imposed from the Argus Newspaper's headquarters in Sauer Street Johannesburg.Gill emigrated and wrote a bestseller which was turned into a Hollywood movie.

When Percy Qoboza was appointed,he insisted that the editorial director be removed so that he could take charge of the newspaper with paternalistic hand guiding him.He got his way.

Shortly after he was appointed editor,and his family left for the United States for his year at Harvard and the deputy editor Bra Joe Latakgomo took over the reins temporarily.

Soweto Students Uprising:
lt was during Joe's watch that thr children started shaking this country-timidly at first.The World reporter Willie Bokaba in particular stuck with the children's story.The first headline was on May 18,five days before Qoboza's return :"Anti-Afrikaans pupils go on strike".Bokaba wrote the story of children at the Phefeni Junior Secondary School in Vilakazi Street refusing to be taught in Mathematics and Social Studies through the medium of Afrikaans.They had thrown out their Afrikaans textbooks,walked out of the classrooms.By the next day the pupils were getting uncontrollable;grabbing a tape recorder from the vice-principal,accusing him of being a police informer and throwing stones at him.He had to be  escorted out of the school.By May 21 the class boycott had spread to three other schools i.e Emthonjeni Higher Primary School;EBhele Higher Primary School and Thulasizwe Higher Primary School.

Was this a revolution that could have been averted by simply listening to the children right at the beginning?We can speculate as much as we like,but truth is that history set a course that took us to  our April 27 1994 triumph.The once timid townships were bristling with new confidence.Young people spent their evenings drinking deeply of Steve Bantu Biko's black consciousness  philosophy that burst on our horizons giving birth to the South African Students 0rganisation(SASO).They sang along with Nina Simone:"Young Gifted And Black".They were planning their liberation and debating their future.

May 24 1600 students keep up strike.The children defied a resolution by a packed meeting of parents the weekend before that urged them to return to their classes while parents took on the fight against the use of Afrikaans as a medium of instruction in half the subjects.The parents formed the Soweto Parents Association and elected an interim committee led by Dr Aaron Montoedi  Mathlare a medical doctor.Soweto students  met at 0rlando D0CC Hall on 13 June 1976 Sunday afternoon ironically opposite the 0rlando Police Station and took a resolution to march to the iconic 0rlando Stadium and present a petition to the Bantu Education officials on 16 June 1976.

More than 10 000 children singing the national anthem Nkosi sikelel "iAfrika in 0rlando West.They now included High Schools that had not been involved in the class boycotts;remember Afrikaans was imposed as a medium of instruction to Junior Secondary and Higher Primary Schools.The children carried placards saying"Away with Afrikaans,Afrikaans is a stench,and Do not force the baas language down our throats".This became the World's story.The senior "The World" photographer Bra Dan Tleketle an 0rlando High School Alumni was assigned to cover a breaking story in Germiston.Mama Sophie Tema left the newsroom with Junior Photographer Bra Sam Nzima 0rlando West Soweto in a VW bettle driven by Mama Sophie Tema.The children marched into history books.

This became the World's story.Photographer Sam Nzima took the picture of Hector Peterson that was a symbol of black resistance in this country.Reporter Mama Sophie Tema took injured Hector Peterson shot by white police to the Phefeni Clinic in a World newspaper car and saw Hector Peterson take his last breath-"l Can't Breathe".Mama Sophie Tema,Willie Bokala and Duma ka Ndlhlovu stuck close to the organisers of the June 16 March and gave the world their story as they hopped from one hideout to another.We got to know of the Soweto Students Representative Council of the charismatic leader Tsietsi Mashinini,and his cabinet people like Seth Sandile Mazibuko,Khotso Seatlholo through the writings of Mama Sophie Tema.This was the World's story as flames engulfed the country.l lost my beloved elder uNdoda Washington Tshabalala(17)he was shot execution style by white policemen during the June 16 Soweto Students Uprising.

Mama Sophie Tema was snapped by the prestigious "Rand Daily Mail,her swansong was sung in the township favourite "The City Press" having accured all this wealth of knowledge,expertise and the hordes of life,Mama Tema was fully armed to fill in any position in the cooperate world.She plugged up courage to join the likes of Mama Helen Suzman and Judge Krigler in the country's lnspectorate 0f Prison Counselling Long Term Prisoner simultaneously in 1994.Mama Helen Suzman's recommendation,Mama Sophie Tema offered Voter-Education to the newly elected voters of our country.

0ther activities which she remained umbilical attached to,she played a vital role in formation of James Mpanza Legacy Foundation Trust.She always reminded us not to forget the role that was played uMama Julia Mpanza uMamNgomezulu the wife of uBabe James Sofasonke Mpanza.uMaMngomezulu was incarcerated with his hubby including their infant uDumisani Mpanza who died at Number 4 Forte Prison due to cold and bad prison conditions and lastly their nephew uAbram"Bizzah"Mngomezulu was arrested during the Soweto's Rent Boycott in 1980's and subsequently hanged by the Apertheid Regime at the height of PW Botha "Total onslaught" when Soweto was on fire and the prevailing slogan was "liberation now education later".

Tweet
More in this category: « Government reiterated its commitment to improve its response to gender-based violence. Public Protector closed 13 reports which were found to be unsubstantiated. »
back to top