South African Women in Dialogue (SAWID) mourns the passing of one of its founding trustees, Dr. Thandi Cynthia Ndlovu. 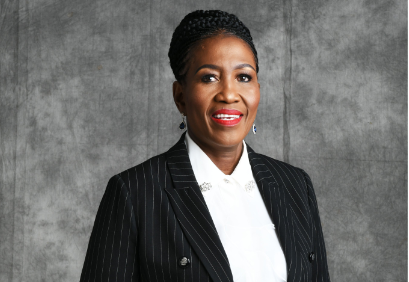 South African Women in Dialogue (SAWID) deeply mourns the unexpected passing of one of its founding trustees, Dr. Thandi Cynthia Ndlovu. She was known variously as a committed feminist activist, as a military commander, as a medical practitioner and as an extraordinary business woman and owner of Motheo Construction, the largest female-owned construction company in South Africa. Dr. Ndlovu was nominated as Business Woman of the Year by the Business Woman's Association of South Africa in 2013, and at the time of her death she was gracing the front cover of the August 2019 edition of Forbes Africa Magazine.

Dr. Thandi Cynthia Ndlovu was born in Soweto, where she attended Orlando High School, and where she became a founding member of the Student’s Christian Movement. At the time of the Soweto Student uprising in 1976, she was serving as the Administrative Secretary of the Student’s Representative Council at the University of Fort Hare, where the political repression at the time forced her to abandon her Bachelor of Science degree. She spent the next few years being trained within the ranks of Umkhonto we Sizwe, the military wing of the ANC, and during 1976 she was posted with other cadres to Novo Catengue, a military training camp in the South of Angola.

Within the MK she served as a Senior Political Commissioner, charged with a Literacy and Education Programme, and as a Military Commander. Although she had not yet trained as a doctor, she served as Medical Officer, and in 1978 she was sent to the then Union of Soviet Socialist Republics, (USSR) where she obtained further training. Upon the completion of her training, she was sent to the ANC Head Quarters in Lusaka, where amongst many other positions she served as Administrative Secretary of the Women’s Section.

Dr. Ndlovu obtained a Bachelor of Science in Human Biology from the University of Zambia in 1984 and obtained an MBchB from the same University in 1991. She worked as a medical practitioner in private practice prior to 1994, and dedicated herself to the built environment through Motheo Construction, the company she established in 1996.

Dr Ndlovu was the Founder and Executive Chairman of the Motheo Group of companies, and the Managing Director of Motheo Construction. By 2011 the Motheo Group had delivered over 30 000 serviced sites and over 50 000 affordable housing units spanning six provinces, translating into over R1.2 billion worth of affordable housing all across South Africa.

In her position as one of the founding members and Deputy Chairperson of South African Women in Dialogue, chaired at the time by Dr. Brigalia Bam, she co-facilitated the SAWID/Democratic Republic of Congo Peace Dialogue in March 2003, and the South Africa/Burundi Peace Dialogue in July 2004. She was the leader of a delegation of South African women from different political parties attending the 2007 Women in Politics Conference in Juba, South Sudan.

Dr. Ndlovu was an incredibly dynamic and humane leader who had travelled widely representing her country and her organisations on various international fora, and she dedicated her many talents to address some of the most intractable problems in South Africa, like the availability of affordable but quality housing.

Her compassionate perspective, wisdom and wide experience in various countries put her in a unique position to grasp the complexities of South Africa, and her deep and committed religious faith, gentle humour and soft-spoken feminist leadership was an inspiration to many. Her generosity and humility was legendary, and her contribution and legacy cannot be overstated. South Africa, the Motheo Group and the many Women’s Organisations that she served selflessly, including SAWID and African Women in Dialogue, (AfWID), have lost a figure of immense stature, inspiration and personal integrity.  Dr. Ndlovu was also a very accomplished golf player.

SAWID would like to express their deepest condolences to her children, husband, family, colleagues, and all the thousands of people who knew and loved her.

More in this category: « Watch:President Cyril Ramaphosa leads Team SA to the G7 Summit in Biarritz, France. Former president Jacob Zuma is facing another lawsuit for defamation. »
back to top