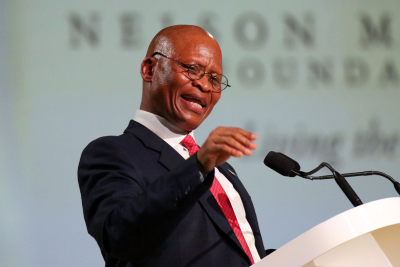 In a statement issued on Thursday, ANC national spokesperson Pule Mabe said Mogoeng had entered the arena of political commentary which might make him vulnerable should he adjudicate a human rights matter in the future.

"It was rather unfortunate for the Chief Justice to state that the 'South African government policy was binding upon himself and that he was not seeking to reject it', but then clearly and openly opposes it as a citizen."

Mabe added the ANC had respect for the independence of the judiciary, saying the party had expressed the contemporary State of Israel was an apartheid state.

@MYANC joins fellow South Africans in expressing concern about sentiments attributed to Chief Justice Mogoeng Mogoeng expressing his apparent support for Apartheid Israel.
We are deeply concerned with the remarks by the Chief Justice during an interview with the Jerusalem Times. pic.twitter.com/EiPVQEGi7Z

Among other remarks, Mogoeng, a staunch Christian said during The Jerusalem Post virtual conference: “The first verse I give is in Psalms 122 verse 6 which says: ‘Pray for the peace of Jerusalem, they shall prosper that love thee'. Also Genesis 12 verses 1 to 3 says to me as a Christian, if I curse Abraham and Israel the Almighty God will curse me too. So, I am under an obligation as a Christian to love Israel, to pray for the peace of Jerusalem, which actually means the peace of Israel. I cannot, as a Christian, do anything other than love and pray for Israel because I know hatred for Israel by me and my nation can only attract unprecedented curses upon our nation”.

"I think as a citizen of this country, we are denying ourselves a wonderful opportunity of being game-changers in the Israeli-Palestinian situation. We know what it means to be at loggerheads, to be a nation at war with itself,” Mogoeng said.

Mabe said in its 53rd national conference, the ANC had expressed its support for the Palestinian people.

The party had also taken a resolution the Palestinians were the victims and the oppressed in the conflict with Israel, he added.

Tweet
More in this category: « Moody's doubtful of SA's track record in reducing government debt and budget deficits. MTN to slash its data costs. »
back to top