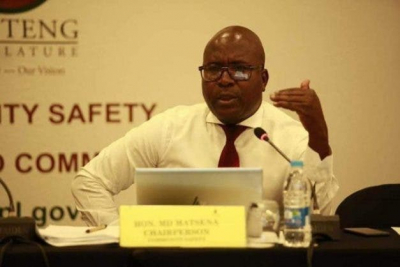 Gauteng Provincial Legislature (GPL) Speaker Ntombi Mekgwe has extended her deepest condolences to the family and friends of its member, Mapiti Matsena, who passed away on Wednesday after being attacked in his home in Tshwane.

Matsena joined the GPL as a Member of the Provincial Legislature (MPL) following the 2019 National and Provincial Elections, and was immediately appointed as the Chairperson of the Portfolio Committee on Community Safety.

He also served as a Member of the Portfolio Committee on Infrastructure Development and Property Management.

Mekgwe said Matsena served both committees diligently and with great distinction, and always demonstrated commitment and dedication in his work as a public representative.

“He represented a rare breed of public representatives with a distinct ability to put political differences aside to achieve common objectives that served the best interest of citizens.

“Understanding his role as a Public Representative, Matsena ensured full accountability by the Gauteng Department of Community Safety and the Provincial Police on matters of community safety, particularly women and children,” Mekgwe said in a statement on Thursday.

Mekgwe also highlighted that Matsena’s firm stance against Gender Based Violence (GBV), gained him popularity amongst his peers, as he never missed an opportunity to campaign and advocate for the strengthening of the fight against GBV, every time he addressed a House Sitting.

“His passing marks a great loss to the province, and we appeal to law enforcement authorities to work with the greatest urgency to bring the murderers to book.

“We wish to extend our deepest condolences to his family and thank them for sharing him with us, his friends, political party the ANC, and the entire community of Gauteng - which he represented in the Legislature and served with distinction. May his soul rest in eternal peace,” Mekgwe said.

This comes after the provincial legislator was fatally stabbed in the chest in his Doornpoort, Pretoria, home on Wednesday evening.

In a statement, Sitole said he had tasked the Gauteng SAPS management to immediately mobilise the 72 Activation Plan to bring to book the perpetrators.

“It has been determined from preliminary investigations that a lone assailant entered the house and stabbed Matsena while he was in his bedroom,” police said in the statement.

“At this stage it does not appear that anything was taken by the suspect.”

General Sitole in the statement assured the Matsena family that the murder was being thoroughly investigated.

“I have tasked the Acting Provincial Commissioner of Gauteng to ensure that this case be investigated by the Provincial Investigation Unit and that critical resources, including Crime Intelligence and Forensic Services, be mobilised to identify and arrest those responsible for the murder of Matsena,” said General Sitole.

Police have appealed to anyone who may have any information on this case to contact the SAPS via Crime Stop on 086 00 10111. Information may also be provided via the MySAPSApp, an application which can be downloaded on any android or iPhone.

All information will be treated with strictest confidence and callers may remain anonymous.

Tweet
More in this category: « Performance agreements between Ministers and President still on track. Government set to engage stakeholders in the education sector. »
back to top