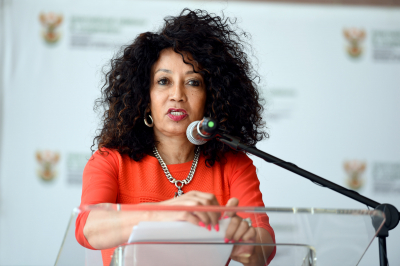 The Western Cape High Court declared on Wednesday that the City’s actions and conduct in demolishing and evicting the community of Hangberg in Hout Bay, was unlawful and unconstitutional.

Sisulu said the State will do everything to enforce this court order and ensure that the City of Cape Town officials comply.

“As the court said, such evictions are in violation of Section 36 (1) of Alert Level 3 regulations made in terms of section 27 (2) of the Disaster Management Act of 2002,” Sisulu said.

The department also welcomed the court’s instructions that the City must rebuild the same size and dimensions of the structures they demolished, within 48 hours of the court granting the order.

“The South African legislation prohibits evictions of residents, and the State is obliged to ensure that such violations of residents' human rights has consequences and is stopped immediately,” the Minister emphasised.

Section 26(3) of the Constitution states that “no one may be evicted from their home, or have their home demolished, without an order of court made after considering all the relevant circumstances”.

The Constitution further prohibits any intimidation, cutting off of services, or any other measure that makes residents living conditions unbearable in order to evict them.

“The State will intervene to enforce the Constitution and the Disaster Management Act, which gives effect to alert level 3 regulations. The State has a duty to protect the rights of all residents,” Sisulu said.

Meanwhile the department has urged residents to take a stand against the pollution of rivers.

The call comes as the department conducts the Clear Rivers campaign, which advocates for citizens to clean up rivers and water ecosystems, as part of dedicating their 67 minutes of goodwill during Mandela Month.

The department has, over the years, tightened the grip on those who pollute rivers. From 2017 to date, more than 50 criminal cases have been opened against transgressors.

Of the 50 cases, nine have been finalised, while 15 court interdict applications are presently underway for pollution related cases, said the department in a statement on Thursday.

“Some of these cases include Lunathi Mining (Pty) Ltd, which is situated near Hendrina in Mpumalanga. The department received a complaint from a community member about unlawful water uses by the mine. The mining pit was full of water and overflowing downstream. This had a negative impact on the quality of water and it also led to the drowning of livestock grazing around the area.”

Subsequent to this, the DWS conducted an investigation and issued a notice in terms of Section 19(3) and 53(1) of the National Water Act.

The act advocates for preventing, remedying the effects of pollution and rectifying contraventions.

Tweet
More in this category: « Government set to engage stakeholders in the education sector. Mchunu set record straight on allegations of misconduct against PSC Director General. »
back to top