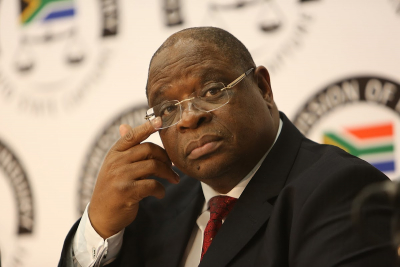 Mti was expected to give insight into dodgy dealings involving corruption-accused facilities management company Bosasa and the state.

Evidence leader Adv Viwe Notshe told the commission that Mti is not available today to testify but he will be represented by his legal representatives.

They argued that this was short notice.

However, after an agreement with Mti's lawyer, evidence leader Advocate Viwe Notshe said the commission would identify a full set of witnesses who implicated Mti and, therefore, he would have to access the information on the commission's website.

Van der Merwe said Mti may reserve his rights in disclosing his defence to the criminal matter which is currently before the courts.

And Nair's lawyer, Dani Dorfling SC, told the commission his client was ready to proceed but they were only informed on Tuesday morning that further statements were still forthcoming.

Deputy Chief Justice Raymond Zondo had to postpone the appearance of both former correctional services boss Linda Mti and Pretoria Magistrate Desmond Nair after it emerged that the commission only served the two with notices to appear over a week ago.

Former correctional services chief financial officer Patrick Gillingham will be issued to with a summons to appear before the judicial commission of inquiry into state capture, it said on Tuesday.

Gillingham was scheduled to appear before the commission chaired by Deputy Chief Justice Raymond Zondo on Wednesday.

The commission said it had served him with a notice to appear before it.

Mokonyane accused Agrizzi of character assassination, sexism and said he over-estimated her influence within the ANC.

Tweet
More in this category: « Sport, Arts and Culture redirects R1 billion to fight COVID-19. Government hopeful in its ongoing discussions with taxi industry over COVID-19 relief fund. »
back to top