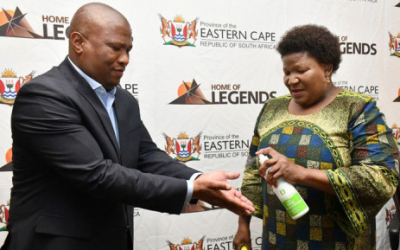 Health Minister, Zweli Mkhize, has shot down calls for the Eastern Cape Health Department to be placed under administration.

“We’re not thinking about that and the reason is you take over when there’s a whole breakdown of management, the reluctance of following directives and instructions and the internal inability for people to cooperate to an extent that it doesn’t actually help what you say and have to go in and take that over,” Mkhize said.

However, he said the province is not there yet.

Mkhize was speaking at the Livingstone Tertiary Hospital on Wednesday, in Nelson Mandela Bay, where he was assessing the province’s state of readiness for the COVID-19 peak.

Currently, he said the national department is in the process of removing their administrator in the North West because the situation is going back to normality.

The Eastern Cape currently has a newly created Project Management Unit (PMU) to assist with its COVID-19 interventions.

He also threw his weight behind the Premier, MEC and Senior Management.

Mkhize said the department would ensure they have enough beds and staff to address some of the challenges.

He also stressed the quality of care which he believes starts with cleanliness.

The Livingstone Tertiary Hospital has been under the spotlight for failing safety audits, being infested with rats, while there are staff shortages.

“Anyone who walks into a dirty hospital gets sicker than they were before they got into hospital. It’s a simple basic issue.”

Mkhize said it is not a question of whether the facility has brooms or not, but one of management and that needs to be dealt with.

The minister also said the hospital must ensure it had adequate human resources.

The Minister has also given the province the greenlight to hire staff as the need arises.

Meanwhile, other issues of soft services such as food and general care and attention are also important.

“These days, people just take a photo and tweet it and they know we’ll find that out. That’s good because you don’t need to go through the whole protocol of reporting.”

In addition, Mkhize said the province needs to add more beds to the 3 500 that are currently available as the province is expected to reach its peak in August and September.

“Now we need every hospital and every clinic and they need to know how to deal with COVID-19 itself. That’s what puts us under pressure.”

He was pleased that the Eastern Cape had renovated some dilapidated hospitals.

They are working on oxygen piping which the Minister conceded was an issue.

Mkhize has pleaded to the Eastern Cape government not to delay in reporting COVID-19 related deaths as it breeds distortion.

“MEC, I’m going to ask your team to continue to report deaths as they come and don’t wait or say you haven’t found all of them. You’ll never find them all. Just give us the report of the deaths on a daily basis,” Mkhize said.

However, he said he understood that correlating the number of Coronavirus fatalities is no easy feat as there are several categories to consider.

“There are people who have got symptoms of COVID-19 and were well and had nothing else and therefore were clear cut positive or clinically are COVID-19 patients.”

Whilst, some may have had underlying conditions and lost their lives as their comorbidities got worse.

“Then there are those who’ve got COVID-19 and it’s just an incidental issue. However, in the end, if they died of something else but cannot deny the fact that they tested COVID-19 positive. That’s one sort of problem; we’d report those as you get them.”

There are many excess deaths as well, Mkhize said.

“The Medical Research Council is tracking deaths every day and they give us those reports. So, you’ll report to us that there are so many deaths when the MRC study comes out, we’d then know whether you under-counted with so much because we see the excess deaths.”

Mkhize said he would not allow the province to go on by a day without accounting for COVID-19 deaths.

“It does give us a bit of distortion. You suddenly don’t have deaths for one day then afterwards you have 400 deaths. It becomes the problem in terms of understanding the distribution,” he stressed.

“It may not be accurate, we know, but let’s keep with the reports.”

Twitter
More in this category: « R4.6bn allocated to upgrade informal settlements. Tourism recovery plan to be submitted to Cabinet. »
back to top