Tributes pour in for Andrew Mlangeni. 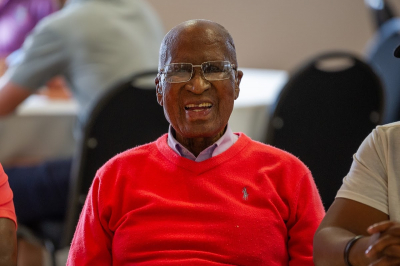 Gauteng premier David Makhura said about Mlangeni's passing: "A giant tree has fallen. A selfless struggle veteran who dedicated his life to fighting for the freedom of the people of South Africa. I offer my sincerest condolences to the Mlangeni family, comrades and friends. May the legacy of Isithwalandwe live on."

The Congress of the People described Mlangeni as an “outstanding” South African who loved his country.

"As COPE, we convey our heartfelt condolences to his children, family, his political party the ANC, his comrades, his friends and the entire country,"the party said in a statement.

DA leader, John Steenhuisen said "His contribution to the fight against apartheid and the liberation of the people of South Africa - which included serving 26 years in prison following the Rivonia Trial in 1964 – will forever be remembered in our nation’s history with reverence and respect."

The DA extended "heartfelt condolences" to Mlangeni’s children and the rest of his extended family.

“He is the last of the Rivonia Trial accused found guilty and sentenced to life imprisonment for taking up arms against the regime. In his entire life, despite the impeccable sacrifice he paid, Baba Mlangeni never felt entitled to any state position or benefits.”

Ngwenya said Mlangeni did not abandon his people after the advent of democracy.

Nelson Mandela Foundation Chief Executive Sello Hatang remembers him with fondness: “He called me mora because I share a first name with his son. He always made time for us and always brought a smile to our faces with his dry, self-deprecating sense of humour.” When asked one day about his lifelong smoking habit, for instance, he responded: “It has ruined my singing voice.” When asked on another occasion, late in life, if he was still playing golf, he said: “If not for my knee I would still be out on the tee.”

Ntate Mlangeni was a member of an extraordinary generation of leaders in South Africa. He was what Madiba called a great patriot. May his life and work keep inspiring us to build the country of his dreams, one which meets the needs of the most vulnerable and which roots out corruption. As he said at his 94th birthday party: "I didn’t struggle so that people can steal from the poor."

We will not forget him. Hamba Kahle Mkhonto.