Productivity SA to receive R104m to preserve and create jobs. 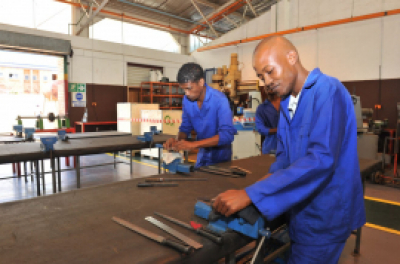 Employment and Labour Deputy Minister Boitumelo Moloi has announced that the Unemployment Insurance Fund (UIF) will provide R104 million to Productivity SA to support some 6 000 SMEs to improve productivity to preserve and create jobs.

Speaking at a media briefing held in Pretoria, Deputy Minister Moloi said this is the time when jobs must be preserved.

“The launch of a massive program such as the Turnaround Solutions at a time like this one, where companies are shutting down, people are losing jobs, is an immediate response and true demonstration of a government at work.

“This program supports initiatives aimed at preventing job losses and implements turn-around strategies to support companies facing operational difficulties which may result in those companies contemplating the retrenchment of employees based on their operational requirements,” Moloi said.

Productivity SA is an entity of the Department of Employment and Labour and the Business Turnaround and Recovery Programme is aimed at preventing job losses and implements turnaround strategies to support companies facing operational difficulties which may result in the companies contemplating retrenchments.

Moloi said as part of fulfilling its mandate, Productivity SA has a duty to implement the Turnaround Solutions Programme which is funded by the UIF.

“I am reliably informed that the first tranche to the value of R23 million has already been disbursed to the Entity in response to this mandate. We are indeed proud to be part of unlocking a programme with a proven record, that has provided solutions for government over two decades,” Moloi said.

Productivity SA, which is established in terms of the Employment Services Act, No. 4 of 2014 as an entity of the Department of Employment and Labour (DEL) has reinstated the Business Turnaround and Recovery Programme (formerly known as the Turnaround Solutions Programme) with effect from the 15 June 2020.

The programme was suspended in 2018 due to the lack of funds.

The allocation of funds for implementing the turnaround strategies will go a long way to enabling Productivity SA to fulfill its mandate as outlined in section 32 of the Act, and objectives of the Presidential Jobs Summit Framework Agreement to save jobs and create conditions conducive for job retention and creation.

The Business Turnaround and Recovery Programme supports initiatives aimed at preventing job losses and implements turnaround strategies to support companies facing operational difficulties which may result in them contemplating the retrenchment of employees based on their operational requirements.

Productivity SA has run the programme for almost two decades and in the process facilitated the prevention of loss of thousands of jobs.

By the end of April 2021, a report on the impact of the programme will be availed detailing the number of jobs saved by the Turnaround Solutions Programme.