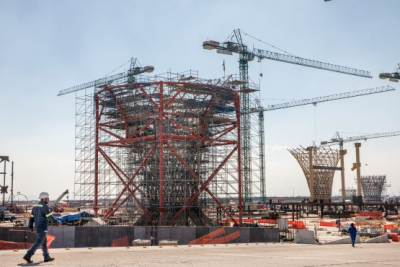 Public Works and Infrastructure Minister, Patricia De Lille, says work being done on infrastructure projects across the country have the potential to contribute significantly to job creation and government’s overall economic recovery plan.

However, the Minister has also sounded a warning on the need to root out corruption in the construction sector.

At a virtual briefing on Monday -- hosted by the Minister and the head of infrastructure investment in the Presidency, Dr Kgosientsho Ramokgopa -- De Lille detailed developments under the Infrastructure Investment Plan, and work carried out within the Strategic Integrated Projects (SIPs), which were gazetted on 24 July 2020.

On 23 June 2020, South Africa held the inaugural Sustainable Infrastructure Development Symposium SA (SIDDSA). The symposium was a culmination of work done to collate and assess all the infrastructure projects in the country, with the intention of addressing the fragmentation and shortcomings that have led to lack of delivery in the past.

Under the SIDDSA methodology, there will be a single point of entry for all infrastructure projects across the country through Infrastructure South Africa (ISA), which is in the process of being established.

De Lille on Monday warned, however, that operations must be kept above board, so that the country can reach its development imperatives.

“The construction industry is also a sector that is significantly plagued by corruption and we are working on systems to prevent and detect corruption.

“Corruption steals from the poor and that is something we can ill-afford. Corruption in this crucial job creation industry must come to an end,” said the Minister.

De Lille outlined some of the projects that have been gazetted. The projects have been assessed in accordance with the regional and district delivery model, considering community needs and the socio-economic environment or inter-sectoral viability.

Collectively, water and sanitation projects are worth R106 billion in investment, spanning across all provinces, with the potential for direct job creation estimated at around 25 000 jobs.

“For example, the Phase 2A of the Mokolo Crocodile Water Augmentation Project (MCWAP-2A) in Limpopo will increase water supply in the Lephalale region. The economic impact of increased water supply is determined by the primary use of the additional water.

“In the case of the MCWAP-2A, the water will be used as a second source for the Medupi and Matimba Power Stations, which will also help to meet the growing demand for water in Lephalale Municipality,” said De Lille.

Three projects from the energy sector have been gazetted. Their total investment value is R58 billion, with the potential for direct job creation estimated at 6 000 jobs.

“As an example, the emergency power programme involves the development, installation, and operation of a total aggregate of up to 2 000 Megawatts new generation capacity in South Africa from independent power producers projects,” the Minister said.

In the transport sector, a total of 15 projects - to the value of R47 billion in investment - have been gazetted. The potential for direct job creation in this sector is estimated at 50 000.

In the human settlements sector, projects worth R138 billion worth of investment have been gazetted. The projects have the potential to create an estimated at 190 000 direct jobs.

De Lille cited the Mooikloof Mega Residential City Project as one of the few projects coming straight from the private sector.

“[It] demonstrates the strength of the SIDS process and methodology to deal with projects from the private and the public sector,” the Minister said.

The digital sector has a single project gazetted worth R4 billion, with the potential to create an estimated 700 direct jobs. The space infrastructure Hub for National Development will allow for the development of satellite infrastructure, satellite-based augmentation systems, and earth observation satellites.

Domestic access to this type of infrastructure will reduce South Africa’s reliance on other countries for the type of information that these satellites can make available and is expected to reduce the time frames for collecting the necessary data.

The agriculture and agro-processing sector have two projects gazetted worth R7 billion in investment value and the potential to create an estimated 4 000 jobs.

“The Marine Tilapia Industry project offers a prime opportunity to rescale developmental objectives using new inclusive growth conduits to address the twin challenge of poverty inequality on the one hand, as well as nutritional security and food sovereignty on the other, by triggering interconnected and inclusive economic activity across the Mbhashe region [in the Eastern Cape,” said De Lille.

The 12 Special Projects that have also been gazetted will be used to create much needed jobs and assist in skills development, as many of the most vulnerable communities have been the hardest hit by the economic impact of the COVID-19 pandemic.

The Rural Bridges “Welisizwe” Programme will not only create much needed jobs but it will help to save lives by connecting rural communities to social amenities they need to access. Communities will no longer have to risk their lives crossing dangerous river streams to get to school, places of work or to access government services.

The Rural Roads Upgrade Programme and the Comprehensive Urban Management Programme will also greatly assist in providing jobs to communities who need it most, while also improving the living conditions of the poorest communities.

De Lille said the process of gazetting the first infrastructure projects, as contained in SA’s Infrastructure Investment Plan, will prioritise the implementation and facilitate the unblocking of mechanisms - whether technical, financial, legal or administrative - that have hindered infrastructure delivery.

“Now that these projects have been gazetted, in terms of the Infrastructure Development Act, this enables its development and implementation to be prioritised,” the Minister said.

The Public Works and Infrastructure Department, together with its partners, will now embark on a social facilitation programme within communities, in order for them to support the development plans.

Twitter
More in this category: « Zikalala warns that "The storm is here". Diko take leave of absence from all official roles in government. »
back to top