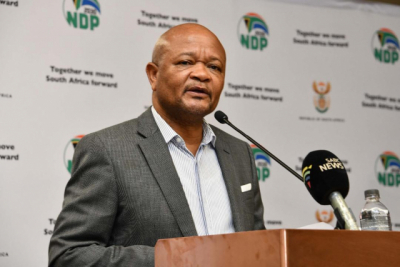 Public Service and Administration Minister Senzo Mchunu said South Africa’s involvement and participation in the African Peer Review Mechanism (APRM) is of great benefit to the country as a whole.

“The vision of the APRM is the full actualisation of transformative leadership and practice for the Africa we all want,” Minister Mchunu said.

Addressing the media virtually in Pretoria earlier today, Mchunu said South Africa is committed to the ideals of the APRM of promoting good governance and economic development.

“Poor governance can critically undermine national development and therefore, good governance is critical in ensuring that the citizens and the country benefit in what may ultimately be realised,” Mchunu said.

The Minister said the activities conducted within the APRM will assist South Africa in attaining its National Development Plan 2030 (NDP) goals of eliminating poverty, creating employment opportunities through faster economic growth and building a capable and ethical State.

“In repositioning the APRM in South Africa, an alignment between the APRM National Action Plan, National Development Plan and the Performance Management and Planning instruments, including Annual Performance Plans of departments, will be effected.

“The APRM, via the NGC, is essentially a vibrant and dynamic platform, through which civil society can ensure accountability, integrity, ethical conduct and delivery of services on the part of all three spheres of government and its departments, including State-owned entities (SOEs),” Mchunu said.

He said the formation of the South African National Governing Council (NGC) will pave way for the preparation of South Africa’s 2nd Generation Review, which is about to be undertaken.

Cabinet approved the formation of the NGC, which comprises the three spheres of government, civil society groups, the private sector and labour, in line with the APRM principle of broad-based participation.

Mchunu said the NGC structure is at the core of the functioning and success of the country’s APRM, as its key role is to mobilise and ensure participation of all stakeholders and citizens in the APRM processes.

“The structure is expected to lead this process of country self-assessment, ensure its credibility and ultimately produce the Country Self-Assessment Report (CSAR),” Mchunu said.

Since its appointment, the NGC has convened meetings in order to formulate its Charter, which is in accordance with the Statute of the APRM and further provides insight to the objectives of the NGC, the structure of the various national structures to be appointed and the functions of the various structures.

“Following the adoption of its Charter, the NGC will be inducted on the processes of the APRM, which are technical in nature. This is to ensure that all representatives understand what is required of them as a structure, in respect of the country’s 2nd Generation Review process.

Mchunu congratulated the newly appointed NGC chairperson and the deputy chairperson to lead the structure of 32 representatives, plus the nine provinces.

Thulani Tshefuta was elected and appointed as the NGC chairperson. Tshefuta holds a number of Post Graduate Qualifications from Wits University, GIBS and Crammer Graduate School of Business at Rollins University – USA.

He is currently studying towards a Master’s Degree in Monitoring and Evaluation with Wits University.

Magdalene Moonsamy - an admitted attorney, the founder of the Women’s Justice Foundation and an activist for human, women and LGBTI rights - was appointed as the deputy chairperson.

Meanwhile, Mchunu paid tribute to all the public servants, both locally and on the continent, who lost their lives in the fight against the COVID-19 pandemic.

“On behalf of government, we want to thank them for their dedication and service to the nation,” the Minister said.

More in this category: « Stats SA - 3 000 jobs lost in the non-agricultural sector. Eskom’s court victory points to higher tariffs. »
back to top