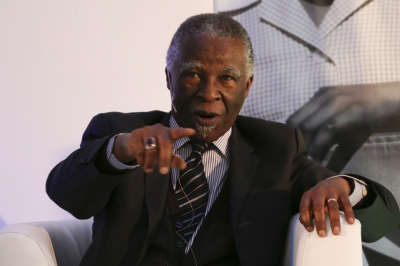 Former president Thabo Mbeki has called for the "renewal" of the ANC to address the challenges the country faces.

Speaking at Mlangeni's funeral, Mbeki said Mlangeni was very concerned about the party he fought for.

He added that deep-seated issues within the ANC were highlighted during the party's 54thnational elective conference, including "a loss of confidence in the ANC because of social distance, corruption, nepotism, arrogance, elitism, factionalism, manipulating organisational principles, abusing state power [and] putting self-interests above the people".

Because of this, "it was natural" that Mlangeni was concerned about the party, he said.

To properly honour his memory, the ANC needed to be renewed, he added.

"We normally say, quite correctly, when people like him depart, their spirit lives on, that we emulate their legacy and that they should rest in peace.

"I think that it would not be possible to deal with these various challenges that our country faces, including matters of ethical leadership… unless we renew the ANC as was called for by that 54thnational conference.

"If we do that and seriously attend to this, this would be a very good farewell and a very good memory – a good monument – to such an outstanding person… as Andrew Mlangeni was."