Gauteng police have arrested 31 suspects in Jeppestown and Malvern following the looting of shops. 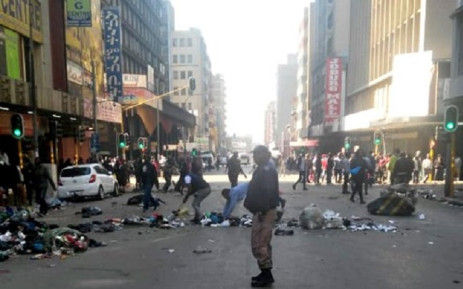 The situation remains tense in Jeppestown and Malvern following the arrest of 31 people in connection with the looting and torching of shops in the areas over the weekend.

Yesterday, chaos erupted in Jeppestown after criminals looted and torched foreign-owned shops following a fire at a building that claimed three lives.

The looting began when onlookers looted the shops while police were attending the scene of the fire.

JMPD spokesperson Wayne Minnaar confirmed there was also looting of foreign-owned shops in the area last night as well as the torching of a car dealership.

In a separate incident, eight people were arrested in Tembisa this morning for looting shops.

More in this category: « The kidnappers of a grade R pupil are demanding R2m for her release. The man arrested in connection with the disappearance of missing UCT student Uyinene Mrwetyana has been charged with her murder and rape. »
back to top