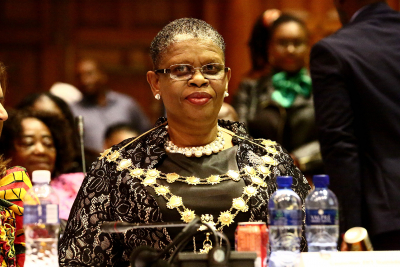 The case against former eThekwini Mayor Zandile Gumede and 16 others has been postponed to 10 December.

Gumede and her co-accused face corruption charges linked to tender fraud to the tune of over R400 million.

The State requested the postponement, saying that while it had enough evidence to start a criminal case a forensic audit still needed to be finalised.

Gumede and her 16 co-accused appeared in the Durban Commercial Crimes Court on Thursday.

Speaking ahead of the high profile return to court, Gumede lamented that the NPA decided to charge her and her co-accused without having concluded their investigation and now their case keeps on being postponed as the state asks for more time from the court to conduct more investigations.

"It’s been a year and a half now, I have been patiently waiting for my charges. I suggest they rather go back and thoroughly do their work. Then they can arrest me again. But for now, they are really destroying my image and the image of our glorious movement (the ANC) for sweet nothing,"Gumede said.

Gumede also confirmed that should the state seek another postponement on Thursday, she and her lawyers would fight to have the case struck off the roll. The last time the matter was heard in July, the state was not yet ready to proceed, saying it was still investigating.

"I have grown tired of making endless and futile trips to court. This is taking a heavy toll on me and I wonder who did I provoke to get this treatment,"she said.

She was removed form her mayoral position after she was charged and just recently, She was sworn in as a member of Kwazulu-Natal legislature.

Her appointment to the provincial legislature sparked public outrage, with the ANC accused of not doing enough to hold its members accountable for allegations of maladministration.

Tweet
More in this category: « AfDB approves $27.33m in COVID-19 grants to boost AU response to curb COVID-19. EFF, Unilever reach an agreement over Clicks offensive advert. »
back to top