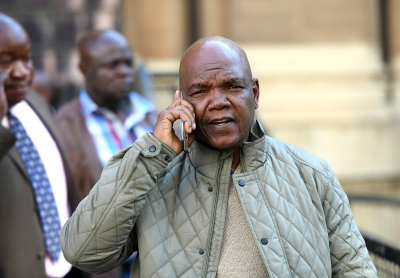 Former crime intelligence boss Richard Mdluli and his co-accused Mthembeni Mthunzi have been sentenced to an effective five years in jail.

In July last year, Mdluli and a former police officer were convicted of kidnapping, assaulting and intimidating Oupa Ramogibe in 1998.

The case relates to the 1998 murder of Oupa Ramogibe who allegedly had an affair with Mdluli’s customary wife Tshidi Buthelezi.

On Monday, judge Ratha Mokgoatlheng told the court that duo had abused their powers as law enforcement officers.

The then suspended crime intelligence boss had been relieved of his duties in 2018, after having been suspended for six years prior.

It came a few months before his retirement, following a mutual agreement announced by then police minister Fikile Mbalula.

Mdluli had been on suspension since 2011 with full pay while on trial for intimidation, kidnapping, assault and murder in 1998.

He was, however, acquitted on the counts of intimidation four months later.

Both men, who are in their 60s, asked the court for leniency when imposing its sentence due to their poor health.

Tweet
More in this category: « Livestream:FS asbestos and housing projects under scrutiny at state capture commission. MEC intervenes to curb taxi violence at Bosman station. »
back to top