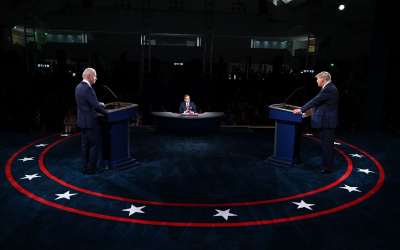 Weeks before the first presidential debate of 2020 ever unfolded, US President Donald Trump laid down the markers of how viewers were supposed to watch it. The programme was supposed to be about the self-immolation of a doddering, drooling 77-year-old fool on live national television in front of 100 million people.

That did not happen.

Instead, the Democratic candidate Joe Biden who showed up was alert, cogent and largely efficient against a competitor who presents a monumental challenge to any opponent. On one level, Biden had an extremely difficult job, just as former Secretary of State Hillary Clinton did four years ago, figuring out how to cut through the relentless bluster with which Trump strafes his debate opponents.

Yet Trump’s own pre-debate criticism of Biden ended up handing the Democratic nominee an enormous gift: the gift of low expectations. Some of Trump’s hard-core supporters may be able to persuade themselves that Biden was the Sleepy Joe they had been hearing about. But that caricature of Biden, based on a run of inferior performances during the primary debates, did quite square with the reality of this opening debate.

More than anything, Biden needed to protect his lead in this first encounter, to prevent Trump from gaining traction at a critical point in the race. And though the former vice president was not always as on point as he might have been, by and large he got the job done.

As in his debate with Paul Ryan – the 2012 running mate of presidential nominee Mitt Romney – Biden relied heavily on a well-stocked arsenal of chuckles and smiles, not to mention a series of facial reactions that ran the gamut from incredulous to disgusted. Biden is particularly adept at knowing what to do when the other guy is speaking – a trick only a veteran debater can master. With a few exceptions, Biden demonstrated that he had thoroughly absorbed the lessons of his debate preparation. He knew when to step back, and when to detonate his rehearsed lines – even though Trump stepped right over a lot of them.

Biden made a point of keeping his focus on the voters, frequently addressing the camera, directly appealing to “you folks at home”.

Trump, by contrast, kept things focused squarely on himself – his stellar achievements, his endless grievances, his bizarre conspiracy theories.

A debate is, at heart, a job interview, with voters as the boss. In this interview for the presidency, Biden remembered to emphasise the bosses’ needs, while Trump emphasised his own.

Although they did not always hit with precision, Biden landed a number of blows on his opponent, calling Trump a “clown,” “the worst president in US history,” and “Putin’s puppy”. This is not the sort of talk Trump is accustomed to, especially after four years of being treated with deference by White House staff and sycophantic media personalities. But it is exactly what Biden’s supporters were hungry to hear.

Biden did botch a few golden opportunities. When Trump drowned out Biden’s attempt to introduce the matter of a certain billionaire’s $750 federal tax bill, Biden did not manage to introduce the matter again – even after the moderator asked for a follow-up. Biden also seemed less than crisp during the segment devoted to “race and violence in our cities,” as the unfortunate wording had it. There is definitely room for improvement in the Biden rehearsal room.

But Biden’s missed opportunities paled beside those of Trump’s. Trump had a decent argument to make about Biden having spent 47 years in politics without leaving a distinct mark, but to pull this off, Trump needed a clear grasp of the Biden record in office. This, however, would have required Trump to prepare for the debate – and apparently, that was not something he was willing to do.

Instead, Trump’s performance was all about wallpapering over the gaps in his knowledge with insults, taunts, and empty promises. Do even staunch Trump supporters really believe that he will release his tax returns someday or magically come with up with a healthcare plan after years of no results?

As the debate progressed, Trump grew increasingly manic. By the time he got to “forest cities” and radical leftists overrunning America’s main urban centres (at least the ones in blue states), any sense of self-control had collapsed. As Biden stood silently by, Trump ranted and raved like – well, like the crazy, old fool that Biden was supposed to be.

Finally, a word about the moderator. The role of moderating a presidential debate, once a crown jewel of journalism, has in recent years gotten increasingly and needlessly controversial. Fox News anchor Chris Wallace did not let himself become a potted plant in this debate, and without doubt, this will make him a target of criticism. But under almost impossible circumstances, Wallace tried to impose order on the chaos Trump was trying to foment. At times it may have seemed as if this was a debate between Trump and Wallace rather than Trump and Biden. But it is difficult to imagine that another journalist could have done much better.