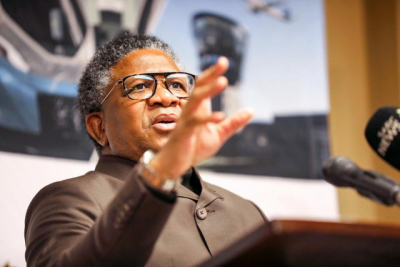 The Minister was speaking at the launch of Transport Month at the Mpumalanga Regional Stadium in Hammarsdale, KwaZulu-Natal.

“The backlog in our road infrastructure remains a source of concern,” Mbalula said on Thursday.

However, government is hard at work ensuring that it provides a safer, affordable, accessible transport system across all modes of transport.

The Minister also announced that work is on track to upgrade Moloto Road, which is notorious for fatal crashes.

“We listened to the pleas of local communities and road users, and have responded by transferring the totality of Moloto Road across the provinces of Gauteng, Mpumalanga and Limpopo to SANRAL,” he said, adding that R4.5 billion has been allocated for this project for five years.

The development has already trained 135 small, medium and micro enterprises (SMMES) and 185 non-governmental organisations (NGOs) from Thembisile Hani Local Municipality to improve their chances of participating in the construction industry.

Meanwhile, some 12 500 jobs are expected to be created.

The Minister used the occasion to warn against corruption.

“The wheels of the law are grinding, however slowly, but they have arrived. We don’t want corruption here,” he said.

“The multimillion upgrade of the 33 km stretch on the N2 was a necessary intervention by government following years of fatal crashes,” he said.

The project created 510 full-time jobs at a cost of R76 million.

Recently, government rolled out the newly completed R512-PWV3 Pampoennek, which produced a better link between the North West, from the west of Pretoria and Johannesburg.

Built at a cost of R377 million, the road stretches from the R512 to the west of Hartebeespoort Dam, through Pampoennek, connecting directly to the N4 to Rustenburg.

“It is no coincidence that we are here at Mpumalanga Stadium today. We chose this venue so we can also celebrate the magnificent Hammarsdale Interchange, recently completed under the expert engineering prowess of our roads agency, SANRAL.”

Apart from improving travel into and out of Hammarsdale, the upgrade saw an increase from two to five lanes.

The Minister noted that the R400 million investment has also encouraged and facilitated industrial expansion in the area, which has led to expanded economic activity .

“This is exactly what President Ramaphosa was referring to when he spoke about infrastructure development as the flywheel that will unlock economic revival in a post-COVID-19 South Africa.”

The project produced jobs for nearly 250 locals and resulted in a wage bill of R46.8 million, which was directly injected into the community.

A further R7.9 million was spent on jobs for women – another key transformation objective in this industry.

“In our quest to create opportunities for black businesses to grow and prosper, contracts to the value of R41.6 million were awarded to 16 local businesses for the provision of plant and materials to the project,” said Mbalula.

The department will also be embarking on improving the N2 and N3 in KwaZulu-Natal.

The revamp of the N2 will focus on a 55km stretch from Lovu River on the South Coast to Umdloti on the North Coast, while the N3 will look into an 80 km section from Durban to Pietermaritzburg.

“These upgrades will include the widening of the N2 and N3 carriageways, with four or five lanes in each direction, and the reconfiguration of most major interchanges along these route sections,” said Mbalula.

“Through SANRAL, government has invested billions of rands building roads across the length and breadth of this country, from major centres of economic activity to our most rural communities,” said Mbalula.