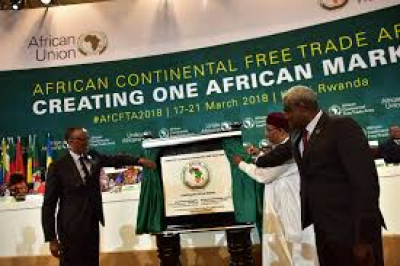 “If we cannot have these major projects that are going to help to integrate our continent, this agreement is going to be dead in the water. We have had a good account on the Maputo Development Corridor and the key issue to highlight is the importance of government leadership to crowd in the private sector and unlock economic potential using public-private partnerships,” he said on Thursday.

The High Commissioner was speaking on day two of the South Africa and Mozambique virtual Trade and Investment Seminar.

More than 360 businesspeople attended the webinar, which focused on trade and investment opportunities available in Mozambique. It also discussed strategic issues regarding Mozambique’s investment plans to stimulate that country’s economic growth amid the COVID-19 pandemic.

This is due to the fact that they assist in putting in place the necessary integrative infrastructure, which brings the countries together and eases the flow of goods between the countries.

Mpahlwa said it is going to be critical for businesspeople from both countries to learn from each other on how to conduct business, specifically in terms of operating in Mozambique.

He said it was important for South African businesspeople to harvest the experience and learn from those who came before them.

Meanwhile, the Chief Director of Trade Invest Africa - a division of the Department of Trade, Industry and Competition (dtic) - John Rocha, said five working groups have been established.

“The five working groups are on agriculture and agro-processing, natural gas, electricity and power, transport and logistics infrastructure, and trade and investment. We have also agreed to mainstream within these working groups the financing element and industrialisation component, in terms of the regional value chains that can be developed,“ said Rocha.

The working groups are also intended to ensure ease of follow-up on some of the areas of interest expressed by a number of companies.

"Importantly, the issues around capacity building, training and skills development, and local content will all be mainstreamed in all of the five working groups,” said Rocha.

The first meeting of the working groups will be held on 15 October 2020 and is expected to come up with a programme of action.

Some of the topics that were covered by the seminar include the impact of COVID-19 on trade and investment between the two countries, infrastructure projects as catalysts to enhance economic growth and regional integration.

The two-day seminar took place under the theme 'Developing Afrocentric solutions and forging partnership in response to COVID-19'.

Tweet
More in this category: « Travellers expected to produce a PCR (polymerase chain reaction) test not older than 72 hours. Mkhize denies receiving donations of R6.5m from Edwin Sodi. »
back to top