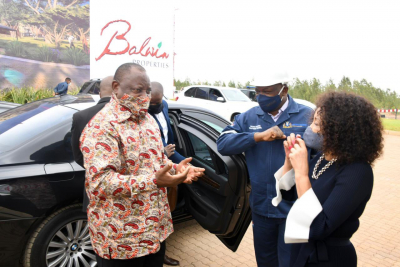 According to Ramaphosa, the Mooikloof project is the outcome of a very successful public-private process and an example of how each sector’s interests can be aligned and can work for mutual benefit.

He began his address by congratulating developers Balwin Properties who worked in collaboration with Gauteng Provincial Government and the  City of  Tshwane who worked together to bring the project to fruition.

Ramaphosa also hailed the District Development Model which calls for a collaboration of the three spheres of government as something that made the project possible.

Moving forward, other stakeholders such as the departments of infrastructure development and human settlements as well as the banking sector will also have a role to play in the project.

The Mooikloof Integrated Development has an estimated project value of over R84 billion and is one of the 62 Strategic Integrated Projects gazetted at the end of July.

The Mooikloof Mega-City development will also lead to the creation of some 41 000 jobs at a time when they are sorely needed.

Ramaphosa also proudly declared that once completed, the Mooikloof Mega-City may end up becoming the world’s largest sectional property development, with land also earmarked for schools, shops and offices.

Tweet
More in this category: « Gautrain put contigency plans ahead of Numsa strike. SAA Technical reaches agreement with its airline customers. »
back to top