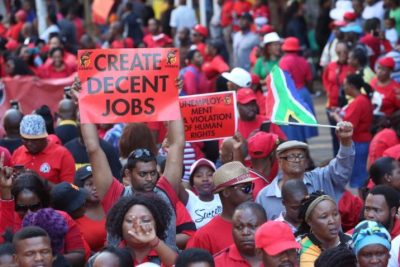 The Congress of South African Trade Unions (Cosatu) will embark on mass strike action on Wednesday as part of an ongoing dispute with the government.

The labour federation has asked its members to stay at home in support of the action due to the impact of the coronavirus pandemic.

Cosatu is the largest trade federation in the country with an estimated membership of 1.8 million workers.

"We are convening this action under the Covid-19 lockdown alert level one regulations. This means that we have a responsibility not to undermine the fight against this deadly coronavirus that has killed so many of our compatriots," the labour federation said in a statement on Monday.

Cosatu said that it will also convene socially distanced pickets and motorcades across all the nine provinces, and in many identified towns and cities.

"This decentralisation of our activities will ensure that workers are involved and are all able to participate in all over the country but also that our activities do not spread this deadly virus,"it said.

While the strike action will primarily focus on the wage dispute with the government, Cosatu said that the federation also wants additional support to be given to frontline workers, and better governance.

Some of the other grievances and demands which have been raised by Cosatu include:

"Acts of sustained civil disobedience are paramount at this time because sitting down and doing nothing will mean that we accept the death sentence that is handed to us by the political and business power structure that is mismanaging the economy and attacking workers’ rights," Cosatu said.

The government has come under fire from organised labour over its refusal to honour the 2018 multi-term three-year wage increase agreement this year, which unions say is the sign that the ANC-led government was attempting to undermine collective bargaining.