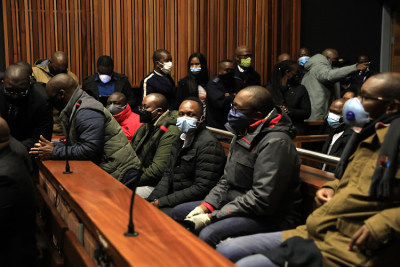 The National Prosecuting Authority said Truter will spend an effective seven years behind bars for his role in the scandal that saw some R1.89 billion looted from the bank between 2015 and 2018, prompting its collapse.

"He was complicit and active during the VBS debacle as has decided to come clean," the NPA said in a statement, after the sentence was handed down.

Truter was the eighth suspect who appeared in the Johannesburg Specialised Commercial Crimes Court, sitting at the Palm Ridge magistrate’s court, in connection with looting of the bank.

When he made his first appearance in July, Truter indicated he intended pleading guilty to the charges he was facing. He faces two counts of fraud, and a count each of money laundering, corruption, racketeering and failure to submit a tax return.

Truter reached a plea and sentence agreement with the state, whereby he pleaded guilty to all six counts.

He admitted that although he claimed the financial statements of the bank for the year ending March 2017 were accurate, he knew the statement of the financial position was false.

Their trial will continue on Thursday.