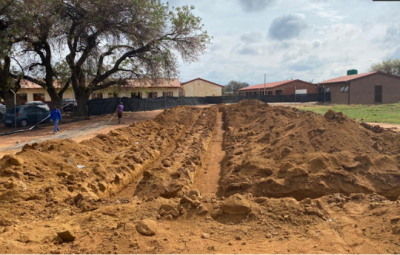 With lockdown now lifting, development of additional classrooms, ablutions facilities, and a kitchen at the Lerome Secondary School, in Moruleng village, is underway.

Sun City, a Sun International resort, has collaborated with the North West Department of Education, Northam Platinum and its Zondereinde Community Trust to help develop a secondary school.

Lerome Secondary School, in Moruleng village, will receive additional classrooms, ablutions facilities, and a kitchen. The total project value is R5.6 million, of which Sun City is contributing R1.6 million, while the Zondereinde Community Trust and the Department of Basic Education put in R2 million each.

The project, which has been three years in the making, was handed over to developers in the past 2 weeks after a thorough and transparent bidding process and the school is expected to receive the completed buildings in April 2021.

“Lerome Secondary School has an enrolment of 926 learners from Grades 8 to 12 but was hampered in its ability to teach due to limited classrooms. This meant that teachers were sometimes forced to teach standing just outside / at the classroom door; a daunting and almost impossible task,” said Khumo Magano, Socio-Economic Development, Community & Stakeholder Engagement Manager for Sun City Resort.

The school is located in a rural area of Lerome (also commonly referred to as Moruleng), which is a part of the Bakgatla ba Kgafela Traditional Authority and, due to the demographics of the area, has been declared as a no-fee paying school. As a result, there is a school feeding scheme programme. “However, the school did not have a proper kitchen in which to prepare food, and its ablution facilities were limited,” explained Magano.

Magano added that additional funds would help make the school’s dreams come true, as the current funding is not sufficient for all Lerome’s needs. He said that the initial project came together due to a serendipitous moment, as Sun City sought a project that would make a meaningful impact and not just for the sake of tick boxes in terms of its licence requirements, at the same time Northam Platinum (through the Northam Zondereinde Community Trust) was seeking to support a similar endeavour hence it made sense for all parties including North West Department of Education to collaborate the resources.

However, there is so much more that the school can benefit from, such as an administration block, said Magano. Furthermore he mentioned that “Part of the envisaged impact is the creation of an environment that is conducive to learning, as well as minimising the risks in the school environment, such as a lack of proper sanitation”.

There were, unfortunately, snags along the way. “Although we succeeded in doing all the groundwork, including all the legalities and the appointment of a service provider, the project had to be halted due to the COVID-19 lockdown,” said Magano.

However, with lockdown now lifting, and all parties on board, the project is going ahead. The support of the school-community leadership (e.g. Bakgatla ba Kgafela Traditional Authority - Headman, Councillor, Department of Education, School Governing Body and local Business Association) including the Moses Kotane Local Municipality have been highly instrumental in assisting to bring the project where it is today and will continue to play a pivotal role going forth.

Magano is hopeful that more partners will come on board to aid the school further. This could, for example, include digital solutions for the school, he says. “To provide really sustainable development to our surrounding communities, we need to partner in a way that provides true value for money, while being totally transparent,” he concluded.

Tweet
More in this category: « Cabinet Lekgotla underway to discuss economic recovery. SA slowly making inroads in beneficiation and industrialisation. »
back to top