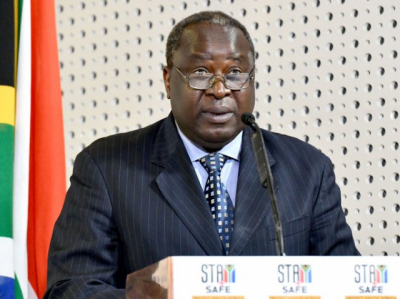 Mboweni will announce a raft of financial measures government will take to assist the country's economy following a tough COVID-19 lockdown.

He will take to the podium against the backdrop of an already struggling economy further battered by the COVID-19 pandemic lockdown.

His Medium Term Budget Policy Statement is highly anticipated, but is unlikely to contain much good news.

Meanwhile the two-day virtual cabinet lekgotla which started on Wednesday morning will focus its discussions on economic reconstruction and recovery following the devastating impact of the Covid-19 pandemic and on crime and corruption.

The meeting is attended by President Cyril Ramaphosa, Deputy President David Mabuza as well as ministers, their deputies, premiers and representatives of the South African Local Government Association (Salga).

The COVID-19 pandemic has essentially shut down the global economy, with businesses forced to close and millions of jobs lost – in South Africa alone, three million people found themselves without work during the first quarter of 2020.

The Cabinet Lekgotla will focus on the economic recovery. As we all know, COVID-19 has caused serious devastation in our lives, economy, employment and businesses,” minister in the presidency Jackson Mthembu said.

"As government, we must come up with a reconstruction and recovery plan to recover from the devastation caused by COVID-19"

He said the lekgotla would include presentations on key areas that would be part of the plan including infrastructure in both the public and private sector. Mthembu added that mass employment would also be prioritised. They would also be looking into how they can industrialise and rebuild in the face of economic devastation.

The meeting will also discuss how to boost expenditure of the public purse and public finances.

The minister said corruption, which has long haunted government, would also be on the agenda. The COVID-19 pandemic and lockdown has brought with it, a flurry of graft allegations, many involving senior government and ANC officials.

"We have seen crime and corruption rearing their ugly head, so the lekgotla will with [this],"Mthembu said.

"So those are the economic matters we will be focusing on but as you also know, one of the priorities apart from economic growth that we have as a country is dealing with crime and corruption," he added.

In September, Ramaphosa met with the National Economic Development and Labour Council (Nedlac), who then gave the greenlight for the economic recovery plan. However there are questions on whether it has even been drafted.

Tweet
More in this category: « Batohi warns the wheels of justice are turning. FW de Klerk's son, Willem, dies of cancer. »
back to top