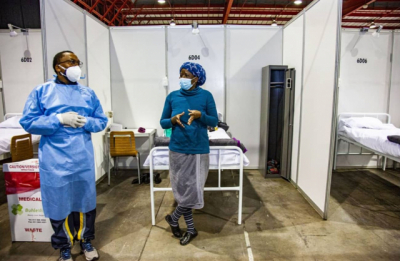 On Friday, Makhura said the SIU found that Masuku had failed to execute his functions in compliance with the constitution and the Public Finance Management Act (PFMA) in his oversight of the procurement of personal protective equipment (PPE).

The report is said to have found that Masuku was made aware of the irregularities in the procurement of PPE but did nothing or very little to act on it. Makhura said that the SIU recommended he takes action to determine whether Masuku is suitable to continue holding the position of health MEC.

"Based on their finding, where they say that the MEC has failed to execute his functions in compliance with constitution and the PFMA, I have decided as the premier of the province to discharge Dr Bandile Masuku from his responsibilities as the Gauteng MEC for health," Makhura said.

He said the SIU was still investigating whether Masuku played any role in the actual corruption that took place in his department.

Makhura said he appreciated the work Masuku has done at the health department since his appointment last year.

"But there are issues before me as the head of the provincial government based on the SIU report that I must act on and it is on that basis that I have decided to discharge MEC Masuku as the MEC responsible for health in our province,"Makhura said.

Makhura said he would not replace Masuku until the SIU has concluded its investigation.

He said if the SIU investigation clears Masuku of any act of corruption he will be reinstated.

Its understood that the ANC provincial executive committee (PEC) will meet on Sunday to deliberate on Makhura’s decision and whether to also remove Masuku as a member of the PEC.

Tweet
More in this category: « WC High Court dismissed Mkhwebane’s urgent bid to halt Parliamentary process to remove her. Government to rollout antigen tests to all ports of entry in South Africa. »
back to top