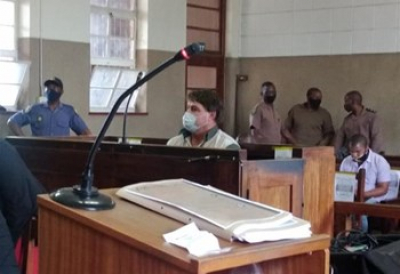 The man arrested in connection with the torching of a police vehicle outside a Free State court last week, will remain behind bars.

He was was part of a violent protest in Senekal when two suspects appeared in court in connection with the murder of a farm manager.

In his 30-minute ruling, Magistrate Buti Mlangeni delivered his judgment and characterised the suspect as a possible threat to the ongoing investigations by the police. He says this is evident because while in custody, Pienaar allegedly prepared people to give evidence that could exonerate him on the charges.

He says while Pienaar and other protestors stormed the court holding cells on Tuesday 6 October, these actions could have led to the escape of detainees who were in lawful custody. Mlangeni adds that releasing Pienaar on bail could lead to shock or public outcry as this would be seen as endorsing lawlessness by the justice system.

Mlangeni told Pienaar and his defence team that he was unable to say what is outstanding in the police investigation.

While delivering his judgment, the defence team of the accused, who appeared to be calm, shook their heads with what seemed to be disbelief with Mlangeni's judgment.

Pienaar has been remanded in custody due to the seriousness of the charges and the potential for another violent protest in the community.

The case has been postponed to 20 November for further investigation.

Meanwhile Police minister Bheki Cele said he understands the arrest of suspects for the murder of farm manager Brendin Horner is cold comfort for his mourning family - and that more work on crime prevention is needed.

The minister said the team received a welcome reception from the Horner family.