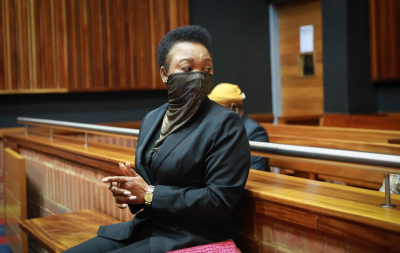 Mgwenya was allegedly involved in fraud relating to a multimillion-rand tender for emergency warning equipment.

In the notice, Sitole said: "You are hereby notified that your suspension transfer under the regulation 10(1) of the SAPS discipline regulations, 2016, will be considered on the grounds that you allegedly committed serious misconduct.

"You are entitled to submit written representations regarding the possible suspension or temporary transfer."

Meanwhile Mgwenya submitted that a suspension would have serious reputation implications for her.

"It is respectfully submitted that there is no legal basis to suspend me at this point in time as a precautionary measure, but rather to expedite the departmental processes in order for the matter to be brought to finality as soon as possible,"she said.

Mgwenya recently appeared at the Palm Ridge magistrate's court after being arrested at her home in the early hours of the morning. She was released on bail and indicated she would plead not guilty to all charges.

Tweet
More in this category: « Government working on a subsidy scheme to empower taxi industry. Ramaphosa says the will be no political interference in corruption investigations. »
back to top