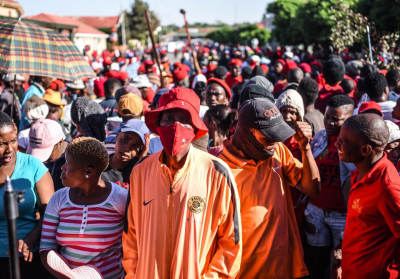 Police Minister Bheki Cele says police officers are fully prepared for any eventuality at the Senekal Magistrate’s Court in the Free State this morning.

His statement comes as the community threatens more chaos should Sekwetje Mahlamba and Sekola Matlaletsa be granted bail.

The two are accused of the murder of farm manager Brendin Horner.

"It would be really foolish for the police to say people have no right to come there. That right is in the constitution and it goes with responsibilities. There are few things that should be taken into consideration. People should know that as they will be marching, they should not interfere [destroy] the property. You don’t destroy property, you don’t injure people you don’t march armed,"added Cele.

The EFF and Afriforum picket outside the court as the alleged killers of Brendin Horner make a second appearance.

Today we stand in defense of the judiciary and in defence of state assets against white terrorist.

Meanwhile farmers in the Free State say they believe farm murders and farm attacks are fuelled by political rhetoric.

Tweet
More in this category: « COVID-19 Daily Update:SA recorded 1,770 new Covid-19 cases in the past 24 hours. Nzimande condemns vandalism of university property. »
back to top