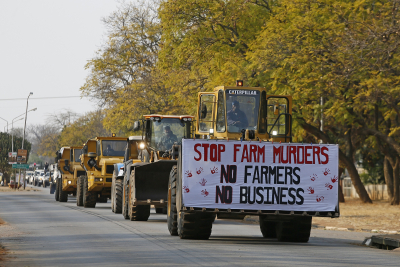 The South African Human Rights Commission (SAHRC) is appealing for calm in the Free State town of Senekal today as two suspects are due to appear in court over the murder of farm manager, Brandon Horner.

This follows the chaotic scenes at Senekal Magistrate’s Court that led to a police van overturned and set alight.

The events unfolded during a protest by farmers, who gathered outside the court, demanding justice for the murdered 21-year-old.

During their first appearance, a police van was overturned and set alight during the protest by farmers, who gathered outside the court demanding justice for Horner’s murder.

The protestors demanded that the accused be handed over to them.

“This event has caused high tensions in the area, and resulted in damage to property and violence during the protest by the group aggrieved by the murder of Horner as well as other farm killings,” said SAHRC’s spokesperson, Gushwell Brooks.

The SAHRC called on all involved to exercise law and order.

“The Commission demands that the constitutional right to protest be exercised within the ambit of the Constitution and the law. Thus all participants in protest action must exercise this right unarmed and peacefully.”

According to the SAHRC, the heightened tensions based on race and social status are of no benefit to the social cohesion that South Africa’s peace and stability are dependent on.

“The push for confrontation with the potential for violence, damage to property and even threats to lives accentuates polarisation which is contrary to fostering South Africa as a constitutional democracy where all are free, equal and are treated with dignity.”

The SAHRC believes that everyone should all work towards securing reconciliation including farm dwellers and farmers.

The Commission has also called on the South African Police Service (SAPS) to restore trust in the law enforcement agencies.

“The Commission thus asks for peace and for communities to allow the justice system and legal processes to run its course, unfettered.

“A peaceful, prosperous nation is dependent on an efficient justice system, which operates independently of community sentiments. Violence and damage to property will not aide in bringing justice in the name of Mr Horner, or any other person who has lost their life to crime,” said Brooks.

Earlier this week, the Justice, Crime Prevention and Security Cluster (JCPS) also called for calm in the area. This as Police Minister Bheki Cele and State Security Minister Ayanda Dlodlo visited the area on Tuesday in an effort to quell simmering tensions.