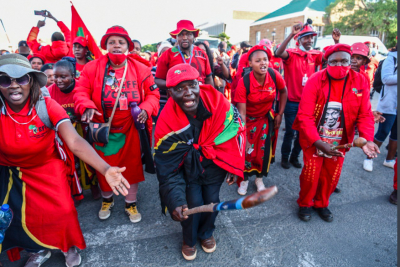 Tensions are high and police visibility even higher as thousands of protesters from various organisations and political groups take to the streets of Senekal.

The protests follow the death of a young farm manager,Brendin Horner, who was brutally murdered.

Two suspects, Sekwetje Isaiah Mahlamba, 32, and Sekola Piet Matlaletsa, 44, arrested in connection with his death will appear in the Senekal Magistrate’s Court today.

EFF members started filtering into the Senekal courtroom to hear the case against the two accused at around 10:00 this morning.

Stone-throwing, intimidation, and vandalism have been witnessed at the standoff in front of the Senekal Magistrate's Court.

The standoff  is between the EFF and farmers outside the Court.

Police Minister, Bheki Cele accompanied a strong police presence in the town to ensure violent unrest does not take place.

Police reportedly searched vehicles entering the town and confiscated some firearms from people participating in the protest.

The killing of Horner sparked riots at the start of this month, and prompted President Cyril Ramaphosa to make a statement urging South Africans to "resist attempts... to mobilise communities along racial lines".