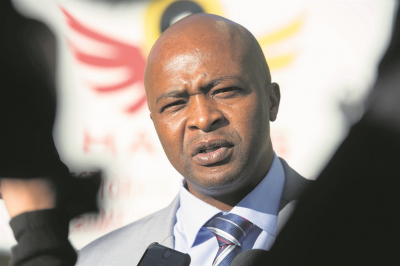 Hawks spokesperson Hangwani Mulaudzi says nothing prohibits him from being a member of an NPO and applying for funding.

In July 2020, the Limpopo Mirror reported that the Hangwani Mulaudzi Foundation which was founded in 2017 by Mulaudzi, received R3 million from the National Lotteries Commission (NLC) to establish a sports centre for the community of Mashamba in Limpopo.

The publication stated "that the sport centre, which would comprise a block of toilets, an office and a change room facility, a borehole with running taps, and fencing, would be handed to the community in three months’ time".

Mulaudzi claims there's been a smear campaign against him for some time now.

"This individual has been part of this smear campaign since 2016. I'm aware. There's a lot of things punted in the media space. I've been called corrupt, I've been called captured and dishonest. If you were to Google, you would find the person who is behind it."

Meanwhile the Democratic Alliance (DA) has expressed its concern after the Hawks spokesperson Hangwani Mulaudzi allegedly received R3 million from the National Lotteries Commission (NLC) while the Hawks were dealing with a corruption case within the commission.

DA MP Mat Cuthbert said they have seen an internal NLC document which confirms the name of the beneficiary,the amount disbursed and the date of payment to this organisation.

"While the DA is supportive of initiatives that aim to develop our rural towns and villages, one has to question the fact that a senior member of the Hawks has received such funding from the NLC," Cuthbert said.

"There is no doubt that this is a clear conflict of interest which has the potential to derail the entire investigation into large-scale looting at the NLC."

Cuthbert added that the DA would write to Trade, Industry and Competition Minister Ebrahim Patel and Police Minister Bheki Cele to determine if the ministers were aware of the R3 million disbursement at the time.

"Also whether or not they deem it to be a conflict of interest,"he said.

Tweet
More in this category: « Mkwanazi admits irregular expenditure was common occurrence in his tenure. Zuma condemns attempts to target his children. »
back to top