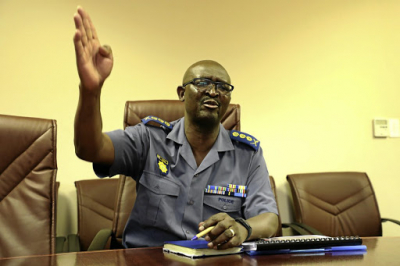 Gauteng Police Commissioner, Lieutenant General Elias Mawela has again commended the significant successes emanating from the partnership between the SAPS in Gauteng and private stakeholders in addressing the high volumes of vehicle crime such as car hijackings and theft.

"I have previously said that we need to sustain the momentum of these crackdown operations at panel beaters or chop shops towards ultimately choking the market for hijackings and theft of vehicles as this often comes with much violence against the victims," said the Commissioner.

This is against the backdrop of the multi-disciplinary Operation O Kae Molao on Thursday, 15 October 2020, where in one of the activations, police uncovered at a chop shop in Bushkoppies outside of Lenasia, body shells of: six stripped luxury vehicles confirmed as hijacked between August 2019 and July 2020 in different parts of Gauteng; four reported stolen vehicles plus a boat and trailer reported stolen in 2015 at Florida SAPS. Ten (10) other vehicles had their VIN numbers tampered with and were therefore seized for investigation.

The Provincial Vehicle Crime Investigating Unit has opened an inquiry for further investigation as no suspects have been arrested as yet. At this point, preliminary investigation has found that one of the stripped luxury vehicles had been towed away from an accident scene without the owner’s knowledge or consent.

Seven (7) more cars including a Quantum, were impounded at a roadblock on the N12 on suspicion of being stolen or hijacked.

Meanwhile, still in Lenasia, a suspect was arrested after allegedly attempting to bribe police officers and brand managers who were in the process of confiscating counterfeit goods (clothing and footwear) found in his possession. Not far from this scene, another team working with SARS Customs on an intelligence-driven activation, pounced on a house and found boxes of illicit cigarettes whose value is yet to be determined. Boxes containing cartons of different illicit cigarettes were stacked on the ground and first floors of the double-storey house.

While Lieutenant General Elias Mawela together with the MEC for Community Safety in the Province, Ms Faith Mazibuko led the operations in the Johannesburg District, the district commissioners of the West Rand, Sedibeng, Tshwane and Ekurhuleni also ensured that criminals in their respective districts felt the heat of Operation O Kae Molao.

In the West Rand, police together with other law enforcement agencies, on Thursday morning partnered with Eskom and embarked on a disruptive operation addressing illegal electricity connections in the Muldersdrift area. The integrated team cut off the illegal connections with further investigations leading to two addresses where police arrested two suspects found in possession of suspected stolen Eskom transformers. Three other transformers and cables were seized. It is reported that this led to a group of protesters barricading the N14 and attacking police who were able to swiftly contain the violence and disperse the crowd, clearing the roads for traffic.

One hundred and eighty seven (187) other suspects arrested for different offences in other activations in the West Rand, 34 of whom were taken in for being illegally in the country. One hundred and forty eight of the arrested suspects were successfully traced during the Detective raids on warrants of arrest for crimes such as murder, assault with the intent to cause grievous bodily harm, child neglect, pointing of firearm, and possession of drugs.

In Ekurhuleni where the integrated team took to the streets of Ivory Park, Alberton, and Etwatwa, most suspects were arrested for possession and/or dealing in drugs including mandrax and nyaope; while a number of liquor outlets were shut down on various contraventions and liquor seized. A total of 277 suspects, 222 of whom were on the police’s list of wanted suspects, were arrested by close of business.

The operations in Tshwane resulted in the arrest of 279 wanted suspects, three (3) for possession of drugs, 11 for being in the country illegally, five illegal liquor outlets shut down, and fines issued to five traders on contravention of the Second Hand Goods Act.

The arrested suspects will appear before the respective courts across the Province.

Tweet
More in this category: « Jacinda Ardern's Labour Party wins New Zealand election. Malema,EFF may face the music over 'Kill the Boer' song. »
back to top