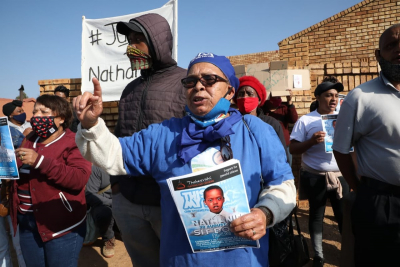 The case involving three police officers charged in connection with the murder of Eldorado Park teenager, Nathaniel Julies, is postponed to 8 December.

The three police officers accused of killing the 16-year-old boy in August returned to the Protea Magistrate’s Court this morning.

They are accused of killing 16-year-old Julies, who had Down Syndrome, near his home last month.

The trio also allegedly tampered with the crime scene.

Family and community members voiced their frustration outside the court after the case was postponed to December for further investigation.

They said the fact that Whiteboy had already admitted to killing Julies should be enough for the state to secure a conviction.

But National Prosecuting Authority’s (NPA) spokesperson in Gauteng Phindi Mjonondwane says the matter is not yet ready for trial.

Mjonondwane said while the state has sympathy with the family, investigations cannot be rushed.

Tweet
More in this category: « Africa's health system hit hard by COVID-19. SADC E8 warns of dangers of contracting Malaria amid COVID-19. »
back to top